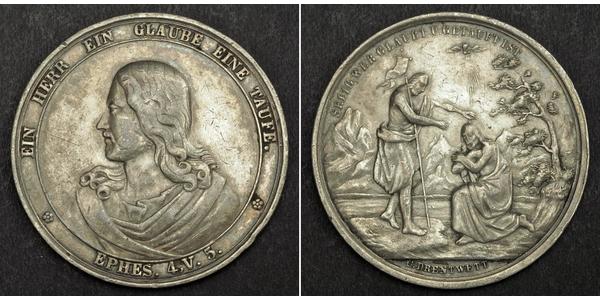 Obverse: Draped bust of Jesus Christ left. Biblical citation above and reference below. Legend: EIN HERR EIN GLAUBE EINE TAUFE, EPHES. 4,V.5. ("One God, one faith, one baptism. Ephes 4-V-5." ) Reverse: Scene of the baptizing of Jesus by Saint John at  the River Jordan near Bethabara. Illuminated dove (Holy  Spirit) above. German inscription above and medallist´s sgnature below. Legend: SELIG, WER GLAUBT U. GETAUFT IST ("Blessed be he who belives and is baptized." ) Exergue: C. DRENTWETT

Baptism (from the Greek noun βάπτισμα baptisma; see below) is a Christian rite of admission and adoption, almost invariably with the use of water, into Christianity. It may be performed by sprinkling or pouring water on the head, or by immersing in water either partially or completely. The synoptic gospels recount that John the Baptist baptised Jesus. Baptism is considered a sacrament in most churches, and as an ordinance in others. Baptism is also called christening,  although some reserve the word "christening" for the baptism of infants. It has also given its name to the Baptist churches and denominations.

Martyrdom was identified early in Church history as "baptism by blood", enabling the salvation of martyrs who had not been baptized by water. Later, the Catholic Church identified a baptism of desire, by which those preparing for baptism who die before actually receiving the sacrament are considered saved. Some Christians have regarded baptism as necessary for salvation, though others, such as Huldrych Zwingli (1484–1531), denied its necessity.

Quakers and the Salvation Army do not practice water baptism at all. Among denominations that practice water baptism, differences occur in the manner and mode of baptizing and in the understanding of the significance of the rite. Most Christians baptize "in the name of the Father, and of the Son, and of the Holy Spirit" (following the Great Commission), but some baptize in Jesus' name only. Much more than half of all Christians baptize infants; many others regard only believer's baptism as true baptism.

The term "baptism" has also been used metaphorically to refer to any ceremony, trial, or experience by which a person is initiated, purified, or given a name.