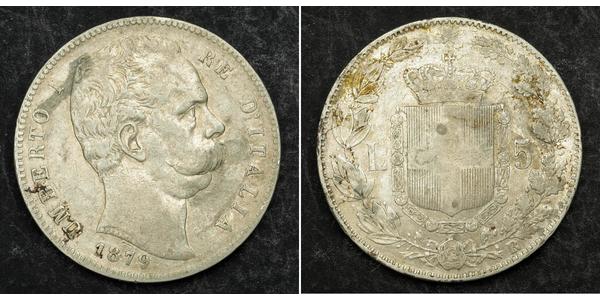 The son of Vittorio Emanuele II and Archduchess Maria Adelaide of Austria, Umberto was born in Turin, which was then capital of the kingdom of Sardinia, on 14 March 1844. His education was entrusted to, amongst others, Massimo Taparelli, marquis d'Azeglio and Pasquale Stanislao Mancini.

Ascending the throne on the death of his father (9 January 1878), Umberto adopted the title "Umberto I of Italy" rather than "Umberto IV" (of Savoy), and consented that the remains of his father should be interred at Rome in the Pantheon, rather than the royal mausoleum of Basilica of Superga.

In the summer of 1900, Italian forces were part of the Eight-Nation Alliance which participated in the Boxer Rebellion in Imperial China. Through the Boxer Protocol, signed after Umberto's death, the Kingdom of Italy gained a concession territory in Tientsin.

The reign of Umberto I was a time of social upheaval, though it was later claimed to have been a tranquil belle époque. Social tensions mounted as a consequence of the relatively recent occupation of the kingdom of the two Sicilies, the spread of socialist ideas, public hostility to the colonialist plans of the various governments, especially Crispi's, and the numerous crackdowns on civil liberties. The protesters included the young Benito Mussolini, then a member of the socialist party.

To a certain extent his popularity was enhanced by the firmness of his attitude towards the Vatican, as exemplified in his telegram declaring Rome "untouchable" (20 September 1886), and affirming the permanence of the Italian possession of the "Eternal City".

A newspaper report of Bresci's attack was carried and frequently read by the American anarchist Leon Czolgosz; Czolgosz used the assassination of Umberto I as his inspiration to murder U. S. President William McKinley in September, 1901 under the banner of Anarchism.