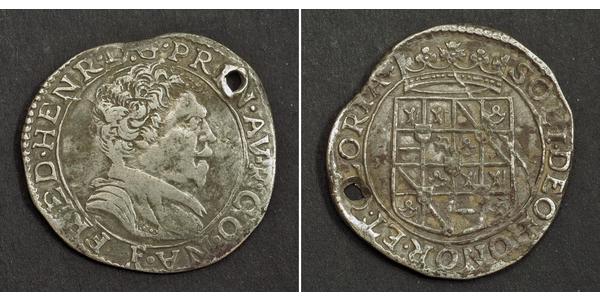 France, on the left bank of the River Rhone north of the city of Avignon. It was constituted in 1163, when Holy Roman Emperor Frederick I elevated the Burgundian County of Orange (consisting of the city of Orange and the land surrounding it) to a sovereign principality within the Empire. The principality became part of the scattered holdings of the house of Orange-Nassau from the time that William I "the Silent" inherited the title of Prince of Orange from his cousin in 1544, until it was finally ceded to France in 1713 under the Treaty of Utrecht. Although permanently lost to the Nassaus then, this fief gave its name to the extant Royal House of the Netherlands by virtue of the imperial immediacy it used to enjoy.

Frederick Henry was born on 29 January 1584 in Delft, Holland, Dutch Republic. He was the youngest child of William the Silent and Louise de Coligny.   His father William was stadtholder of Holland, Zeeland, Utrecht, and   Friesland. His mother Louise was daughter of the Huguenot leader Gaspard de Coligny, and was the fourth wife of his father. He was thus the half brother of his predecessor Maurice of Orange, no issue, deceased in 1625.

Frederick Henry was born six months before his father's assassination on 10 July 1584. The boy was trained to arms by his elder brother Maurice,   one of the finest generals of his age. After Maurice threatened to   legimitize his illegitimate children if he did not marry, Frederick   Henry married Amalia of Solms-Braunfels in 1625. His illegitimate son by Margaretha Catharina Bruyns (1595–1625), Frederick Nassau de Zuylenstein was born in 1624 before his marriage. This son later became the governor of the young William III of England for seven years.

On the death of Maurice in 1625, Frederick Henry succeeded him in his paternal dignities and estates, and also in the stadtholderates of the five provinces of Holland, Zeeland, Utrecht, Overijssel and Guelders, and in the important posts of captain and admiral-general of the Union (commander-in-chief of the Dutch States Army and of the Dutch navy).

Frederick Henry proved himself almost as good a general as his   brother, and a far more capable statesman and politician. For twenty-two   years he remained at the head of government in the United Provinces,   and in his time the power of the stadtholderate reached its highest   point. The "Period of Frederick Henry," as it is usually styled by Dutch   writers, is generally accounted the golden age of the republic. It was marked by great military and naval triumphs, by   worldwide maritime and commercial expansion, and by a wonderful   outburst of activity in the domains of art and literature.

The chief military exploits of Frederick Henry were the sieges and captures of Grol in 1627, 's-Hertogenbosch in 1629, of Maastricht in 1632, of Breda in 1637, of Sas van Gent in 1644, and of Hulst in 1645. During the greater part of his administration the alliance   with France against Spain had been the pivot of Frederick Henry's   foreign policy, but in his last years he sacrificed the French alliance   for the sake of concluding a separate peace with Spain, by which the   United Provinces obtained from that power all the advantages they had   been seeking for eighty years.

On Frederick Henry's death, he was buried with great pomp beside his father and brother at Delft. The treaty of Munster,   ending the long struggle between the Dutch and the Spaniards, was not   actually signed until 30 January 1648, the illness and death of the   stadtholder having caused a delay in the negotiations. Frederick Henry   left an account of his campaigns in his Mémoires de Frédéric Henri (Amsterdam, 1743). See Cambridge Mod. Hist. vol. iv. chap. 24.