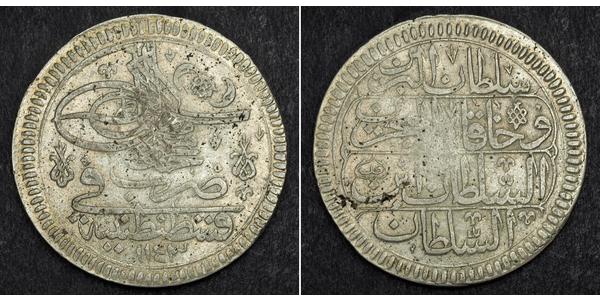 Reverse: Four lines of kufic legends with numerous decorative elements and knots in fields. Regnal year (8 shown as initial letter "ha") in field of 4th line to the left.

Nadir Shah's devastating campaign against the Mughal Empire, created a void in the western frontiers of Persia, which was effectively exploited by the Ottoman Sultan Mahmud I, who initiated the Otttoman-Persian War (1743-1746), in which the Mughal Emperor Muhammad Shah closely cooperated with the Ottomans and their ambassador Haji Yusuf   Agha, these relations between the two great empires continued until   Muhammad Shah's death in 1748.

On 28 September 1730, Patrona Halil with a small group of fellow Janissaries aroused some of the citizens of Constantinople who opposed the reforms of Ahmet III. Sweeping up more soldiers Halil led the riot to the TopkapÄ± Palace and demanded the death of the grand vizer, NevÅŸehirli Damat Ä°brahim Pasha and the abdication of Ahmet III. Ahmet III acceded to the demands, had   Ä°brahim Pasha strangled, and agreed to his nephew, Mahmud, becoming   sultan.

Mahmud I was recognized as sultan by the mutineers as well as by   court officials but for some weeks after his accession the empire was in   the hands of the insurgents. Halil rode with the new sultan to the   Mosque of Eyub where the ceremony of girding Mahmud I with the Sword of Osman was performed; many of the chief officers were deposed and successors   to them appointed at the dictation of the bold rebel who had served in   the ranks of the Janissaries and who appeared before the sultan   bare-legged and in his old uniform of a common soldier. A Greek butcher,   named Yanaki, had formerly given credit to Halil and had lent him money   during the three days of the insurrection. Halil showed his gratitude   by compelling the Divan to make Yanaki Hospodar of Moldavia. However, Yanaki never took charge of this office.

The Khan of the Crimea assisted the Grand Vizier, the Mufti and the Aga of the Janissaries in putting down the rebellion. On 24 November 1731, Halil was strangled by the sultan's order and in his presence, after a Divan in which Halil had dictated that war   be declared against Russia. His Greek friend, Yanaki, and 7,000 of   those who had supported him were also put to death.[citation needed]   The jealousy which the officers of the Janissaries felt towards Halil,   and their readiness to aid in his destruction, facilitated the exertions   of Mahmud I's supporters in putting an end to the rebellion after it   had lasted over a year.

The rest of Mahmud I's reign was dominated by wars with Persia, Austria and Russia. Mahmud I entrusted government to his viziers and spent much of his time composing poetry. He died at TopkapÄ± Palace, Constantinople.