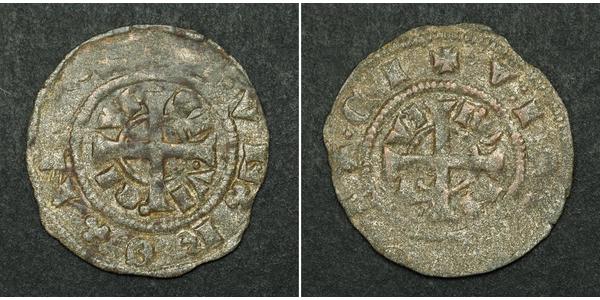 Verona is a city in Veneto, northern Italy and one of the seven provincial capitals of the region.

The city derived importance from being at the intersection of several roads. Stilicho defeated Alaric and his Visigoths here in 403. But with the taking of Verona (489 AD) the Gothic domination of Italy began; Theodoric built his palace there, and in Germanic legend the name of Verona is linked with his. This city remained in the power of the Goths all through the Gothic War (535–552), with the exception of a single day in 541, when the Armenian officer Artabazes effected an entrance. Dissensions which arose among the Byzantine generals in regard to booty enabled the Goths to regain possession. In 552 Valerian vainly endeavoured to gain an entrance, and only the complete overthrow of the Goths brought about its surrender.

In 569 it was taken by Alboin, King of the Lombards, in whose kingdom it was, in a sense, the second city in importance. There Alboin himself was killed by his own wife in 572. The dukes of Treviso often resided there. At Verona Adalgisus, son of Desiderius, in 774 made his last desperate resistance to Charlemagne, who had destroyed the Lombard kingdom. Verona was then the ordinary residence of the kings of Italy, the government of the city becoming hereditary in the family of Count Milo, progenitor of the counts of San Bonifacio. From 880 to 951 the two Berengarii resided there. Otto I ceded to Verona the marquisate dependent on the Duchy of Bavaria.

The splendour of the city in those days, dominated by its forty-eight towers, is described in a Latin ode of which we shall speak later on. The increasing wealth of the burgher families eclipsed the power of the counts, and in 1100 Verona organised itself as a commune. The San Bonifacio could at most hold the office of podestà of the city now and then. Verona, at first undecided, was forced by Vicenza to join the Lombard League. This, however, gave rise to the factions of Guelphs and Ghibellines in Verona. When Ezzelino IV was elected podestà, in 1226, he was able to convert the office into a permanent lordship, and in 1257 he caused the slaughter of 11,000 Paduans on the plain of Verona (Campi di Verona). Upon his death the Great Council elected as podestà Mastino della Scala, and he converted the "signoria" into a family possession, though leaving the burghers a share in the government. Failing to be re-elected podestà in 1262, he effected a coup d'état, and was acclaimed capitano del popolo, with the command of the communal troops. It was not without long internal discord that he succeeded in establishing this new office, to which was attached the function of confirming the podestà. In 1272 Mastino was killed by the faction of the nobles.

The reign of his son Alberto as capitano (1277–1302) was one incessant war against the counts of San Bonifacio, who were aided by the House of Este. Of his sons, Bartolomeo, Alboino and Cangrande I, only the last shared the government (1308); he was great as warrior, prince, and patron of the arts; he protected Dante, Petrarch, and Giotto. By war or treaty he brought under his control the cities of Padua (1328), Treviso (1308) and Vicenza.

Alberto was succeeded by Mastino II (1329–1351) and Alberto, sons of Alboino. Mastino continued his uncle's policy, conquering Brescia in 1332 and carrying his power beyond the Po. He purchased Parma (1335) and Lucca (1339). After the King of France, he was the richest prince of his time. But a powerful league was formed against him in 1337 – Florence, Venice, the Visconti, the Este, and the Gonzaga. After a three years war, the Scaliger dominions were reduced to Verona and Vicenza (Mastino's daughter Regina-Beatrice della Scala married to Barnabò Visconti). Mastino's son Cangrande II (1351–1359) was a cruel, dissolute, and suspicious tyrant; not trusting his own subjects, he surrounded himself with Brandenburg mercenaries. He was killed by his brother Cansignorio (1359–1375), who beautified the city with palaces, provided it with aqueducts and bridges, and founded the state treasury. He also killed his other brother, Paolo Alboino. Fratricide seems to have become a family custom, for Antonio (1375–87), Cansignorio's natural brother, slew his brother Bartolomeo, thereby arousing the indignation of the people, who deserted him when Gian Galeazzo Visconti of Milan made war on him. Having exhausted all his resources, he fled from Verona at midnight (19 October 1387), thus putting an end to the Scaliger domination, which, however, survived in its monuments.

The year 1387 is also the year of the famous Battle of Castagnaro, between Giovanni Ordelaffi, for Verona, and John Hawkwood, for Padua, who was the winner.

Guglielmo (1404), natural son of Cangrande II, was more fortunate; with the support of the people, he drove out the Milanese, but he died ten days after, and Verona then submitted to Venice (1405). The last representatives of the Scaligeri lived at the imperial court and repeatedly attempted to recover Verona by the aid of popular risings.

Verona was occupied by Napoleon in 1797, but on Easter Monday the populace rose and drove out the French. It was then that Napoleon made an end of the Venetian Republic. Verona became Austrian territory when Napoleon signed the Treaty of Campo Formio in October, 1797. The Austrians took control of the city on January 18, 1798. It was taken from Austria by the Treaty of Pressburg in 1805 and became part of Napoleon's Kingdom of Italy, but was returned to Austria following Napoleon's defeat in 1814, when it became part of the Austrian-held Kingdom of Lombardy-Venetia. In 1866, following the Six Weeks War, Verona, along with the rest of Venetia, became part of Italy.

In 1866, on the anniversary of the defeat of Königrätz, the Austrians evacuated Verona, their strongest fortress in Venetia, which thus became Italian.