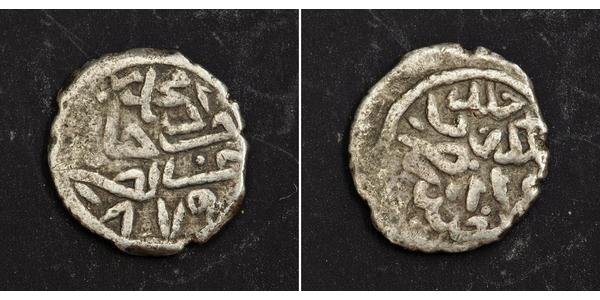 The akçe (Ottoman Turkish: آقچه‎) (Turkish pronunciation: [akʧe]) was the chief monetary unit of the Ottoman Empire, a silver coin. Three akçes were equal to one para. One-hundred and twenty akçes equalled one kuruş. Later after 1687 the kuruş became the main unit of account, replacing the akçe. In 1843, the silver kuruş was joined by the gold lira in a bimetallic system.  Its weight fluctuated, one source estimates it between 1.15 and 1.18 grams. The name akçe originally referred to a silver coin but later the meaning changed and it became a synonym for money. The mint in Novo Brdo, a fortified mining town in the Serbian Despotate rich with gold and silver mines, began to strike akçe in 1441 when it was captured by the Ottoman forces for the first time.

Mehmed II (Ottoman Turkish: محمد ثانى‎, Meḥmed-i sānī; Modern Turkish: II. Mehmet Turkish pronunciation: [ˈikind͡ʒi meh.met]; 30 March 1432 – 3 May 1481), commonly known as Mehmed the Conqueror (Turkish: Fatih Sultan Mehmet), was an Ottoman Sultan who ruled first for a short time from August 1444 to September 1446, and later from February 1451 to May 1481. At the age of 21, he conquered Constantinople (modern-day Istanbul) and brought an end to the Byzantine Empire. Mehmed continued his conquests in Anatolia with its reunification and in Southeast Europe as far west as Bosnia. Mehmed is considered a hero in modern-day Turkey and parts of the wider Muslim world. Among other things, Istanbul's Fatih district, Fatih Sultan Mehmet Bridge and Fatih Mosque are named after him.