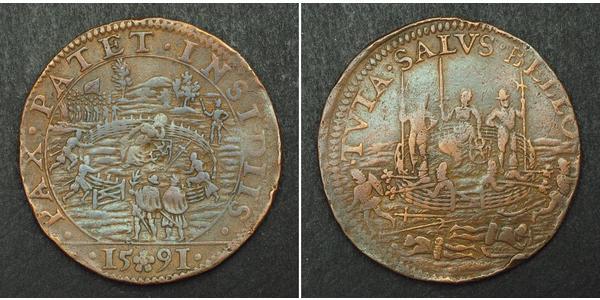 The religious "clash of cultures" built up gradually but inexorably into outbursts of violence against the perceived repression of the Habsburg Crown. These tensions led to the formation of the independent Dutch Republic, whose first leader was William the Silent (William of Orange), followed by several of his descendants and relations. This revolt was one of the first successful secessions in Europe, and led to one of the first European republics of the modern era, the United Provinces. Due to the nature of the conflict, the factions involved and changing alliances, modern day historians have put forward arguments that the Dutch Revolt was also a civil war.

King Philip was initially successful in suppressing the rebellion. In 1572, however, the rebels captured Brielle and the rebellion resurged. The northern provinces became independent, first in 1581 de facto, and in 1648 de jure. During the revolt, the United Provinces of the Netherlands, better known as the Dutch Republic, rapidly grew to become a world power through its merchant shipping and experienced a period of economic, scientific, and cultural growth. The Southern Netherlands (situated in modern-day: southern Netherlands, Belgium, Luxembourg and northern France) remained under Spanish rule. The continuous heavy-handed rule by the Habsburgs in the south caused many of its financial, intellectual, and cultural elite to flee north, contributing to the success of the Dutch Republic.[citation needed] The Dutch imposed a rigid blockade on the southern provinces that prevented Baltic grain from relieving famine in the southern towns, especially from 1587 to 1589. By the end of the war in 1648, large areas of the Southern Netherlands had been lost to France, which had, under the guidance of Cardinal Richelieu and Louis XIII of France, allied itself with the Dutch Republic in the 1630s against Spain

The first phase of the Eighty Years War can be considered the Dutch Revolt. The focus of the latter phase was to gain official recognition of the already de facto independence of the United Provinces. This phase coincided with the rise of the Dutch Republic as a major power and the founding of the Dutch Empire.

Until the 16th century, the Low Countries-roughly now corresponding to Netherlands, Belgium and Luxembourg-consisted of a number of duchies, counties and bishoprics, most of which were under the supremacy of the Holy Roman Empire.

Most of the Low Countries had come under the rule of the House of Burgundy and subsequently the House of Habsburg. In 1549 Holy Roman Emperor Charles V issued the Pragmatic Sanction, which further unified the Seventeen Provinces under his rule. Charles was succeeded by his son, King Philip II of Spain. In 1568 the Netherlands, led by William I of Orange,   revolted against Philip II because of high taxes, persecution of   Protestants by the government, and Philip's efforts to modernize and   centralize the devolved-medieval government structures of the provinces. This was the start of the Eighty Years' War.

In 1579 a number of the northern provinces of the Netherlands signed the Union of Utrecht, in which they promised to support each other in their defence against the Spanish army. This was followed in 1581 by the Act of Abjuration, the declaration of independence of the provinces from Philip II.

In 1582 the United Provinces invited Francis, Duke of Anjou to lead them; but after a failed attempt to take Antwerp in 1583, the duke left the Netherlands again. After the assassination of William of Orange (10 July 1584), both Henry III of France and Elizabeth I of England declined the offer of sovereignty. However, the latter agreed to turn the United Provinces into a protectorate of England (Treaty of Nonsuch, 1585), and sent the Earl of Leicester as governor-general. This was unsuccessful and in 1588 the provinces   became a republic. The Union of Utrecht is regarded as the foundation of   the Republic of the Seven United Provinces, which was not recognized by   the Spanish Empire until the Peace of Westphalia in 1648.

The Republic of the United Provinces lasted until French revolutionary forces invaded in 1795 and set up a French puppet state, called the Batavian Republic which would be replaced by the Napoleonic Kingdom of Holland.