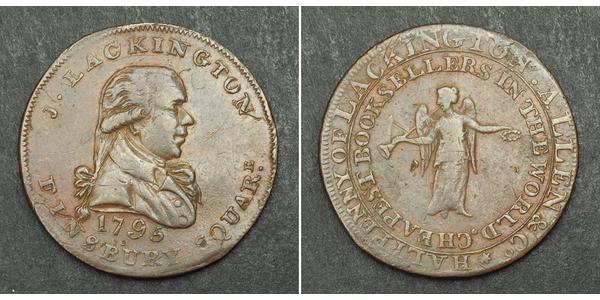 Reverse: A figure of Fame blowing a trumpet.   Legend: HALFPENNY OF LACKINGTON . ALLEN & Co. * CHEAPEST BOOKSELLERS IN THE WORLD

James Lackington (31 August 1746, in Wellington, Somerset – 22 November 1815, in Budleigh Salterton, Devon) was a bookseller who is credited with revolutionizing the British book trade. A shoemaker's son trained as a cobbler, he showed early initiative by selling pies and cakes in the street when aged 10 and teaching himself to read. In August 1773, Lackington arrived in London with two shillings and sixpence, and would eventually become a wealthy man. He is best known for refusing credit at his shop which allowed him to reduce the price of books throughout his store. He printed catalogues of his stock; according to Lackington's biography, the first edition contained 12,000 titles. He bought whole libraries and published writers' manuscripts. He also saved remaindered books from destruction and resold them at bargain prices, firmly believing that books were the key to knowledge, reason and happiness and that everyone, no matter their economic background, social class or gender, had the right to access books at cheap prices.

Lackington's main bookstore in Finsbury Square was called the "Temple of the Muses" and was said to have been large enough "that a mail-coach and four were driven round the counters at its opening" in 1793. In 1794 he minted a token in 1794, with his image on the obverse and the reverse reads "HALFPENNY of J. LACKINGTON & Co." "CHEAPEST BOOKSELLERS IN THE WORLD."

His love of books is exemplified in the tale that, on arriving in London with his wife, he spent their last half-crown on a book of poems. He explained "for had I bought a dinner, we should have eaten it to-morrow, and the pleasure would have been soon over, but should we live fifty years longer, we shall have the Night Thoughts to feast upon."

Lackington wrote two autobiographies: Memoirs of the First Forty-Five Years of the Life of James Lackington (1791) and The Confessions of James Lackington (1804), to which Letters, on the bad consequences of having daughters educated at Boarding Schools was later appended. He considered himself to have been blessed with two happy marriages, the first to Nancy, who died of fever, then Dorcas.

In 1798, Lackington retired to his estate in Gloucestershire, leaving the Temple of the Muses to his third cousin George Lackington.