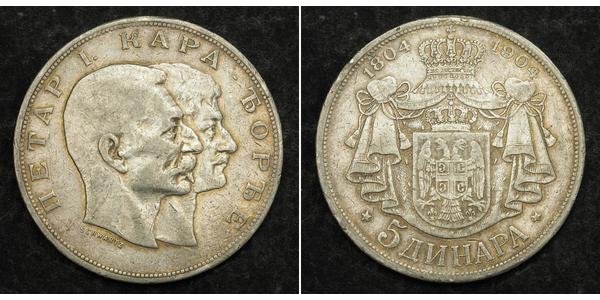 The House of Karadordevic (Karageorgevich, also Karadjordjevic or simply Djordjevic) is a Serbian dynasty, descended from Karadorde. The family had a long blood feud with the Obrenovic dynasty. The dynasty lost the throne in November 1945 when the Communist party seized power in Yugoslavia. Peter II of Yugoslavia never abdicated. The House of Karadjordjevic comes from Ðorde Petrovic, a pig farmer , known to his followers as Karadorde. In 1804, the Serbs revolted against the Ottoman Empire that controlled the Balkans at that time. The First Serbian Uprising was successful and Karadorde established a government in Belgrade.   In 1811 he was recognised as ruler with the right of succession vested   in his family. However, in 1813 the Ottomans returned, and Karadorde and   his family fled. His son Prince Alexander, however, returned to rule Serbia in 1842 and reigned until 1858. When Karadorde was killed by Miloš Obrenovic, a feud between the two houses of Karadordevic and the Obrenovic developed which lasted until the Obrenovic King Alexander I was killed in 1903 with his family and the Karadjordjevic returned to the throne. In 1903 the Serbian Parliament requested that Prince Peter - grandson of Ðorde Petrovic (Karadorde) - come to the throne of the Kingdom of Serbia, following the murder of King Aleksander Obrenovic and his wife, Draga Mašin, by the Black Hand. Peter was duly crowned as King Peter I. Shortly before the end of World War I, representatives of the three peoples proclaimed a Kingdom of the Serbs, Croats and Slovenes under King Peter I. The senior branch of the family became extinct in 1920 with the death of Prince Alexis Karageorgevich.

Peter I of Serbs, Croats and Slovenes also known as Peter I Karadordevic (Serbian, Croatian, Serbo-Croatian: Petar I Karadordevic) (29 June 1844 – 16 August 1921), also known as King Peter the Liberator, was King of Serbia from 1903 to 1918 after which he became the first King of Serbs, Croats  and Slovenes, which from the very beginning was colloquially called  Yugoslavia within the kingdom and in the rest of Europe.

Peter was born in Belgrade to Prince Alexander of Serbia and his consort, Princess Persida Nenadovic. Prince Alexander  abdicated in 1858 and took his son with him into exile in present-day Romania.

The young noble spent much of his exile in France, where he received an education and even participated in the Franco-Prussian War of 1871 as a French Army officer. On one occasion during the war, after  being separated from his unit, he narrowly avoided capture by swimming  across the near-frozen Loire River. During the Serb uprising against Ottoman Empire in 1876 in Bosnia and in Herzegovina,  Peter took on the name Mrkonjic, a slavicized version of his last name,  and joined the freedom fighters. He had to leave the region at the  insistence of then-prince Milan Obrenovic, the ruler of Serbia, who saw Peter as a rival and feared his popularity among the Serbian people. He married Princess Zorka of Montenegro, daughter of King Nicholas I, in 1883. They had five children: Princess Helen in 1884, Princess Milena in 1886, Prince George in 1887, Prince Alexander in 1888 and Prince Andrew in 1890. Princess Milena died at the age of  one in 1887, and Prince Andrew, the last child, died in childbirth  along with his mother.

The King was relatively inactive during the First World War,  although he did occasionally visit trenches to check up on his troops.  One memorable visit in 1915 involved Peter, by then 71, picking up a  rifle and shooting at enemy soldiers. Following Serbia's military  defeat to the forces of Austro-Hungary Peter led the army and civilian  refugees through the mountains to the sea on a 'Calvary known to few  peoples'. (R. Wolfson "Years of Change. European History 1890-1945")