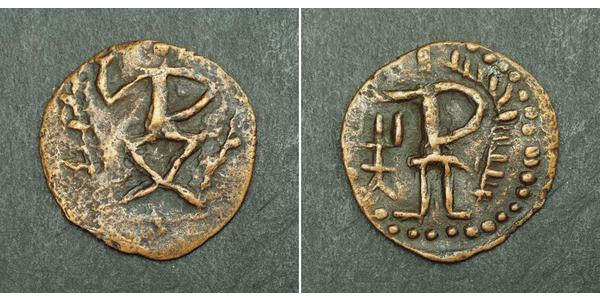 Reverse: The diety "Mao" standing left, extending hand in benediction and holding hilt of sword. Tamgha (state seal of the Huvishka) to left, garbled letters to left. Pseudo-legend to right. all within circle of pellets.

One of the great remaining puzzles of Huvishka's reign is the devaluation of his coinage. Early in his reign the copper coinage plunged in weight from a standard of 16g to about 10-11g. The quality and weight then continued to decline throughout the reign until at the start of the reign of Vasudeva the standard coin (a tetradrachm) weighed only 9g. The devaluation led to a massive production of imitations, and an economic demand for the older, pre-devaluation coins in the Gangetic valley. However, the motivation (and even some of the details) of this devaluation are still unknown.

Huvishka (Kushan: Οοηϸκι, "Ooishki") was the emperor of the Kushan Empire from the death of Kanishka (assumed on the best evidence available to be in 150 CE) until the succession of Vasudeva I about thirty years later.

His rule was a period of consolidation for the Empire. Huvishka's territory encompassed Balkh in Bactria to Mathura in India, locations were it is known that he minted his coinage. His reign seems to have been essentially peaceful, consolidating Kushan power in northern India, and moving the center of the Kushan Empire to the southern capital city of Mathura.

Huvishka was the son of Kanishka. His reign is also known as the golden age of Kushan rule. The reign of Huvishka corresponds to the first known epigraphic evidence of the Buddha Amitabha, on the bottom part of a 2nd-century statue which has been found in Govindo-Nagar, and now at the Mathura Museum. The statue is dated to "the 28th year of the reign of Huvishka", and dedicated to "Amitabha Buddha" by a family of merchants. There is also some evidence that Huvishka himself was a follower of Mahāyāna Buddhism. A Sanskrit manuscript fragment in the Schøyen Collection describes Huvishka as one who has "set forth in the Mahāyāna."

Compared to his predecessor Kanishka, Huvishka was worshipper of Shiva.

He also incorporates in his coins for the first and unique time in Kushan coinage the Hellenistic-Egyptian Serapis (under the name Σαραπο, "Sarapo"[7]), and the Goddess Roma (thought to represent "Roma aeterna"), under the name "Riom" (Greek: ΡΙΟΜ).

Some of the coins of Huvishka also featured Maaseno on his coins, the Kushan incarnation of the Hindu god Karttikeya, or Skanda, whose epithet was "Mahasena".[citation needed] This god being particularly important to the Yaudheyas, it may have been incorporated into Kushan coinage when the Kushans expanded into Yaudheya territory in order to establish control of the Mathura area. It may also have been adopted as a way to appease the warlike Yaudheyas. In effect, the Kushans became the suzerains of the Yaudheyas in the area.