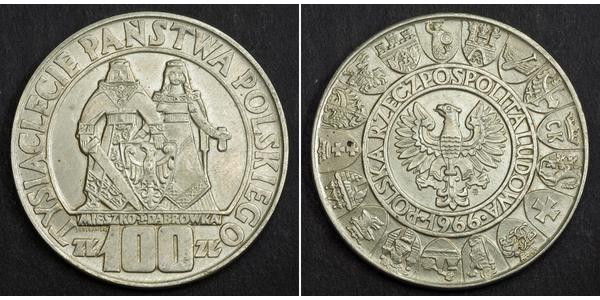 The Polish People's Republic (Polish: Polska Rzeczpospolita Ludowa,) was a country in Central Europe that existed from 1947 to 1989, and the predecessor of the modern democratic Republic of Poland. With a population of approximately 37.9 million inhabitants near the end of its existence, it was the most populous state of the Eastern Bloc after the Soviet Union. Having a unitary Marxist–Leninist communist government imposed by the Soviet Union following World War II, it was also one of the main signatories of the Warsaw Pact. The largest city and official capital since 1947 was Warsaw, followed by industrial Łódź and cultural Kraków.

The former country covers the history of contemporary Poland between 1952 and 1989 under the Soviet-backed communist government established after the Red Army's release of its territory from German occupation in World War II. The name People's Republic was introduced and defined by the Constitution of 1952 which was based on the 1936 Soviet Constitution. The state's official name was the Republic of Poland (Rzeczpospolita Polska) between 1947 and 1952 in accordance with the temporary Constitution of 1947. From 1952, the Sejm exercised no real power, and Poland was regarded as a puppet entity set up and controlled by the Soviet Union. With time, Poland developed into a satellite state in the Soviet sphere of influence.

The Polish People's Republic was a one-party state characterized by constant internal struggles for democracy and better living conditions. The Polish United Workers' Party became the dominant political faction, officially making Poland a socialist country, but with more liberal policies than other states of the Eastern Bloc. Throughout its existence, economic hardships and social unrest were common almost in every decade. The nation was split between those who supported the party, those who were opposed to it and those who refused to engage in political activity. Despite this, some groundbreaking achievements were established during the People's Republic such as rapid industrialization, urbanization of smaller or larger cities and access to free healthcare and education was made available. The birth rate was high and the population almost doubled between 1947 and 1989. The party's most successful accomplishment, however, was the rebuilding of ruined Warsaw after World War II and the complete riddance of illiteracy, which stood at 30% in 1931 and at 2% in 1988.

The Soviet Union, an exemplar state, had some influence over both internal and external affairs, and the Red Army was stationed in Poland as in all other Warsaw Pact countries. The Polish People's Army was the main branch of the Armed Forces. The official police organization, responsible for supposed peacekeeping and violent throttling of protests, was renamed Citizens' Militia. Under the command of the Ministry of Public Security of Poland "UB", the Militia committed serious crimes to maintain the Communists in power, including the harsh treatment of protesters, arrest of opposition leaders and in extreme cases murder, with at least 22,000 people killed by the regime during its rule. As a result, Poland had a high-imprisonment rate but one of the lowest crime rates in the world. This was often fictitiously glorified by the ruling Polish Worker's Party, which described Poland as a safe and educated near-Utopian society.