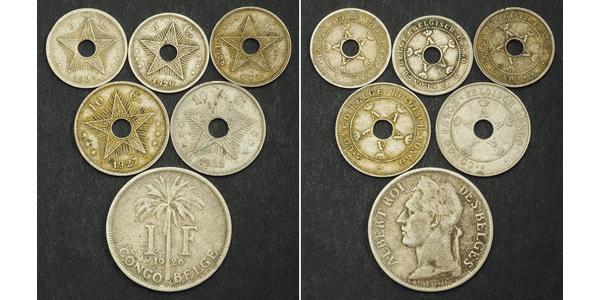 The Belgian Congo was the formal title of present-day Democratic Republic of the Congo (DRC) between King Leopold II's formal relinquishment of his personal control over the state to Belgium on 15 November 1908, and Congolese independence on 30 June 1960.

On 18 October 1908, the Belgian parliament voted in favor of annexing the Congo as a Belgian colony. This was only after King Léopold II had given up any hope to maintain a substantial part of the Congo Free State as separate crown property. The government of the Belgian Congo was arranged by the 1908 Colonial Charter. Executive power rested with the Belgian Minister of Colonial Affairs, assisted by a Colonial Council (Conseil Colonial). Both resided in Brussels. The Belgian parliament exercised legislative authority over the Belgian Congo. The highest-ranking representative of the colonial administration in the Congo was the Governor-general. From 1886 until 1926, the Governor-general and his administration were posted in Boma, near the Congo River estuary. From 1926, the colonial capital moved to Léopoldville, some 300 km further upstream in the interior. Initially, the Belgian Congo was administratively divided into four provinces: Léopoldville (or: Congo-Kasaï), Equateur, Orientale and Katanga, each presided by a vice-Governor-general. An administrative reform in 1932 increased the number of provinces to six, while "demoting" the Vice-governor-generals to provincial Governors.

The territorial service was the true backbone of the colonial administration. Each province was divided into a number of districts (24 in all), and each district into territories (some 120 in all). A territory was managed by a territorial administrator, assisted by one or more assistants. The territories were further subdivided into numerous "chiefdoms" (chefferies), at the head of which the Belgian administration appointed "traditional chiefs" (chefs coutumiers). The territories administered by one territorial administrator and a handful of assistants were often larger than a few Belgian provinces taken together (the whole Belgian Congo was nearly 80 times larger than the whole of Belgium). Nevertheless, the territorial administrator was expected to inspect his territory and to file detailed annual reports with the provincial administration. In terms of jurisdiction, two systems co-existed: a system of European courts and one of indigenous courts (tribunaux indigènes). These indigenous courts were presided over by the traditional chiefs, but had only limited powers and remained under the firm control of the colonial administration. In 1936 it was recorded that there were 728 administrators controlling the Congo from Belgium. Belgians living in the Congo had no say in the government and the Congolese certainly did not either. No political activity was permitted in the Congo whatsoever. Public order in the colony was maintained by the Force Publique, a locally recruited army under Belgian command. It was only in the 1950s that metropolitan troops—i.e., units of the regular Belgian army—were posted in the Belgian Congo (for instance in Kamina).

The colonial state—and in fact any authority exercised by whites in the Congo—was often referred to by the Congolese as bula matari. Bula matari ("break rocks") was one of the names originally given to Stanley, because of the dynamite he used to crush rocks when paving his way through the lower-Congo region. The term bula matari came to signify the irresistible and compelling force of the colonial state.

When the Belgian government took over the administration from King Léopold II in 1908, the situation in the Congo improved in certain respects. The brutal exploitation and arbitrary use of violence, in which some of the concessionary companies had excelled, were curbed. The tragedy of "red rubber" was put to a stop. Article 3 of the new Colonial Charter of 18 October 1908 established that: "Nobody can be forced to work on behalf of and for the profit of companies or privates". In reality, forced labour, in differing forms and degrees, would not disappear entirely until the end of the colonial period.

The transition from the Congo Free State to the Belgian Congo was a break, but it was also marked by a large degree of continuity. The last Governor-general of the Congo Free State, Baron Wahis, remained in office in the Belgian Congo, and the majority of Léopold II's administration with him. Opening up the Congo and its natural and mineral riches for the Belgian economy remained the main motive for colonial expansion, but all the same other priorities, such as healthcare and basic education, slowly gained in importance.

The Belgian Congo was directly involved in the two world wars. During WWI, an initial stand-off between the Force Publique and the German colonial army in German East-Africa (Tanganyika) turned into open warfare with a joint Anglo-Belgian invasion of German colonial territory in 1916 and 1917 during the East African Campaign. The Force Publique gained a notable victory when it marched into Tabora in September 1916 under the command of general Charles Tombeur after heavy fighting.

After the war, Belgium was rewarded for the participation of the Force Publique in the East African campaign with a League of Nations mandate over the former German colony of Ruanda-Urundi. During WWII, the Belgian Congo was a crucial source of income for the Belgian government in exile in London. The Force Publique again participated in the Allied campaigns in Africa. Belgian Congolese forces under the command of Belgian officers notably fought against the Italian colonial army in Ethiopia in Asosa, Bortaï and Saïo under Major-general Auguste-Eduard Gilliaert during the second East African Campaign.