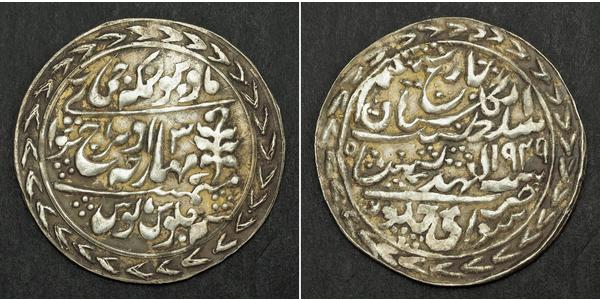 Obverse: Legends in three. Regnal year (28) beneath flower in middle right line. All within wreath-like border.

Reverse: Legends in three lines. Date (1949) in 2nd line. All within wreath-like border.

Upon his ascension in 1922, Man Singh embarked on a program of modernization, creating infrastructure and founding numerous public institutions that would later result in Jaipur being selected the capital of Rajasthan. In 1958, Man Singh was also among the ruler to realize the potential of tourism in Rajasthan, turning Rambagh Palace into a luxury hotel. Under his rule various laws of land reform were first introduced in his state,like Jaipur Tenancy Act. Later in 1956, the Jagidari (feudal) form of political administration were abolished during the government of the Congress Party in India. In 1965, the Indian government appointed Sawai Man Singh, Indian Ambassador to Spain. Utilising his various contacts in Europe, he spent much of his time in Europe to ensue new military technology and arms-deal for the Indian army (Crewe). He was especially noted as an enthusiastic (10-Goal) polo player, winning among other trophies the World Cup in 1933. During the 1950s, Man Singh owned Saint Hill Manor in East Grinstead, West Sussex, which was sold to L. Ron Hubbard, founder of Scientology in 1959.

Sawai Man Singh II ( Mor Mukut Singh; August 21, 1912–June 24, 1970 ) was the last ruling Maharaja of Jaipur belonging to Kachwaha clan of Rajputs. He ruled the princely state between 1922 and 1949, when the state acceded unto the Dominion of India. Thereafter, he held office as Rajpramukh of Rajasthan between 1949 to 1956. In later life, he served as Ambassador of India to Spain. He was also a notable sportsman and celebrated polo player.

Sawai Man Singh II (also known in Jaipur as "SMS") was born Mor Mukut Singh, the second son of Thakur Sawai Singh of Isarda by his wife Sugan Kunwar from kotla (Utter Pradesh). His father was a nobleman belonging to the Kachwaha clan of Rajputs. Mor Mukut grew up in the dusty, walled township of Isarda, a chief Thikana of the Rajawat sub-clan which lies between the towns of Sawai Madhopur and Jaipur in present-day Rajasthan. His family was connected to the ruling house of Jaipur and Kotah (where his father's sister was married). The then-Maharaja of Jaipur, Sawai Madho Singh II, had been born the son of a former Thakur of Isarda and had been adopted into the ruling family of Jaipur. After giving him up for adoption, Madho Singh's actual father had in turn lacked for an heir. He adopted the son of a distant kinsman and was succeeded by that lad as Thakur of Isarda. That lad was Sawai Singh, father of Mor Mukut Singh. In this manner, Mor Mukut could be reckoned near kin to Maharaja Madho Singh II of Jaipur.

After being adopted to become Maharaja of Jaipur, Madho Singh II had numerous (no less than 65) children by various concubines, but the highly superstitious Maharaja was warned by a sage against having legitimate heirs and thus took great care not to impregnate his five wives. On March 24, 1921, Madho Singh II adopted Mor Mukut to be his son and heir. The boy was given the name "Man Singh" upon his adoption. Madho Singh II died on September 7, 1922 and was succeeded by Man Singh as Maharaja of Jaipur and head of the Kachwaha clan of Rajputs. The new Maharaja was eleven years old.

In 1970, Man Singh suffered an accident while playing polo in Cirencester, England. He died later the same day. He was survived by his four sons. He was succeeded as titular Maharaja of Jaipur and head of the Kachwaha clan by his eldest son, Maharaja Sawai Bhawani Singh of Jaipur. Following his death Indira Gandhi was finally able to repress the power of India's former rulers in democratic India as they formed a large bulk of her opposition party, the Swatantra party.

A statue of Sawai Man Singh was installed at the Ram Niwas Bagh in Jaipur, the statue was unveiled at a grand function on 30 March 2005. Maharaja Sawai Bhawani Singh of Jaipur died on 17 April 2011, aged 79.