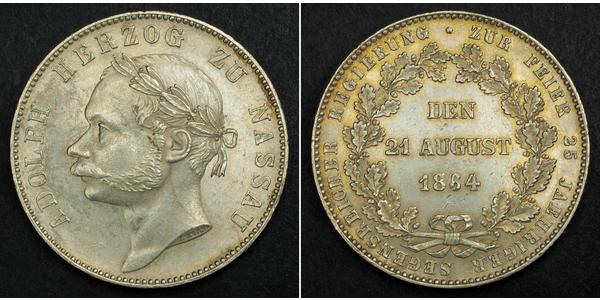 On 17 July 1806, the remaining counties of Nassau-Usingen and Nassau-Weilburg joined the Confederation of the Rhine. Under pressure from Napoleon I both counties merged to form the Duchy of Nassau on 30 August 1806, under the joint rule of Frederick Augustus, and his younger cousin Frederick William.   As Frederick August had no heirs, he agreed that Frederick William   should become sole ruler after his death. However Frederick William died   from a fall on the stairs at Weilburg Castle on 9 January 1816, and it   was his son William who became Duke of Nassau.

At the Congress of Vienna, the Principality of Orange-Nassau was incorporated into the Duchy of Nassau and subsequently the unified Duchy joined the German Confederation with Wiesbaden as its new capital. Through the extinction of most lines, the   Nassau-Usingen branch of the Nassau-Weilburg line under Duke William   became the reigning house of Nassau until the Austro-Prussian War in 1866, when it was annexed by the Kingdom of Prussia and incorporated into the Province of Hesse-Nassau. William's son Adolphe, the last Duke of Nassau, received Luxembourg after the male line of Nassau-Dillenburg became extinct in 1890.

Adolph became Duke of Nassau in August 1839, after the death of his father. Wiesbaden had by this time become the capital of the Duchy and Adolph took up residence in the newly constructed Stadtschloss in 1841. On 4 March 1848 he consented to the population of Nassau's 9   "Demands of the Nassauers". A few years later, however, he revoked his   liberal views and took a strongly conservative and reactionary course.   In general, though, he was seen as a popular ruler. He supported the Austrian Empire in the Austro-Prussian War of 1866. After Austria's defeat, Nassau was annexed to the Kingdom of Prussia and he lost his throne on 20 September 1866.

In 1879, Adolphe's niece Emma of Waldeck and Pyrmont, the daughter of another of his half-sisters, married William III, King of the Netherlands and Grand Duke of Luxembourg. In 1890, their only daughter Wilhelmina succeeded on his death without surviving male issue to the Dutch   throne, but was excluded from the succession to Luxembourg by the Salic Law. The Grand Duchy, which had been linked to the Netherlands in personal union since 1815, passed to Adolphe in accordance with the Nassau Family Pact.   Adolphe was King-Grand Duke William III's 17th cousin once removed   (through male line), which is the greatest distance among two   consecutive rulers in history.

In any case, as he was already 73 years old and knew little of   Luxembourgish politics, he left his hands off the day-to-day governing.   The prime minister Paul Eyschen,   in office since 1888, took care of the affairs of state, and this   created a tradition that the ruler would remain absent from the politics   of the day. In Adolphe appointed his son William as   Lieutenant-Representative. In 1905 he died at Hohenburg and in 1953 was buried in the crypt of the Weilburg castle chapel.