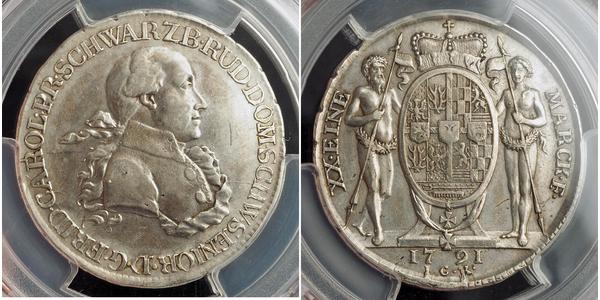 Schwarzburg-Rudolstadt was a small historic state in present-day Thuringia, Germany, with its capital at Rudolstadt.

Albert's descendants ruled as sovereign counts of the Holy Roman Empire. Count Albert Anton (1662–1710) was elevated to the rank of a Prince by Emperor Leopold I of Habsburg, it was however his son Louis Frederick I (1710–1718) who first bore the princely title, whereby Schwarzburg-Rudolstadt in 1711 became a principality under the same entity. It withstood the mediatisation and after the Empire's dissolution joined the Confederation of the Rhine in 1807 and the German Confederation in 1815.

Frederick Charles of Schwarzburg-Rudolstadt was born in Rudolstadt, the son of Prince Louis Günther II of Schwarzburg-Rudolstadt and his wife Sophie Henriette, born Countess Reuss of Untergreiz (1711–1771). As a child, he began his natural history collection, which later went to the Natural History Museum of Rudolstadt. In 1757, he created the Princely Natural History Collection at the Ludwigsburg Castle in Rudolstadt. The collection was later enlarged, and in the 19th century, it occupied seven rooms in the castle. One of the first supervisors of the collection was Christoph Ludwig Kämmerer. In 1919, the collection was moved to Heidecksburg Castle.

Frederick Charles of Schwarzburg-Rudolstadt corresponded with Johann Heinrich Merck, among others, and let him have some rhinoceros bones and other pieces from his collection for research. Frederick Charles also corresponded with Johann August Ephraim Goeze (1731–1793), with the physician Friedrich Martini, with the vicar Johann Samuel Schröter (1735–1808) and with Johann Ernst Immanuel Walch (1725–1778). He had personal and scientific relationships with his correspondents and kept their writings in the library of his Cabinet. Some of these writings were dedicated to him, for example the third volume of Martini's conchology text, published in 1777, was dedicated to His Princely Highness, the Crown Prince Frederick Charles of Schwarzburg-Rudolstadt, dedicated by his humble subject, the author. The second edition of Jacob Theodor Klein's Naturalis Dispositio; Echinodermatum was edited and revised by Nathaniel Gottfried Leske and was also dedicated to Frederick Charles.

In 1792, Frederick Charles built a theatre on the green in Rudolstadt. It was inaugurated a few weeks after his death. Johann Wolfgang von Goethe was its director from 1793 to 1803. It later evolved to form the Thuringia State Theatre in Rudolstadt.