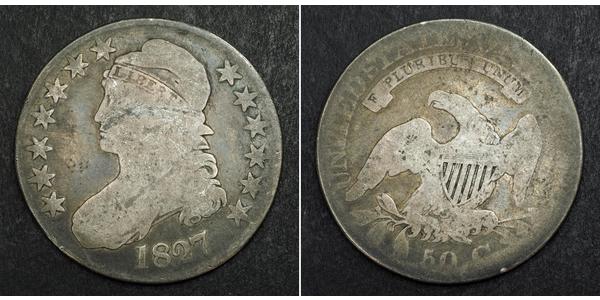 Obverse: Draped female bust of Liberty, wearing inscribed cap. Date below, 13 stars around. Legend: LIBERTY ******* 1827 ****** Reverse: Eagle, with a striped shield upon its breast, olive branch and three arrows in its claws. Banner with motto above. Legend: UNITED STATES OF AMERICA - 50 C.

There was also a gold design created by engraver Robert Scot created   in 1795, also called the Capped Bust, although it is more popularly   known as the "Turban Head" because of its unusual, exotic appearance.   The Turban design was used on the gold Quarter Eagle, Half Eagle, and   Eagle from 1795 to 1834. On the Quarter and Half Eagles, the Turban   design was replaced with the regular Capped Bust design in 1807, however   the Eagle stayed with the original design until it was replaced with   the "Coronet" Liberty Head design in 1838, having stopped production of   the Eagle in 1804.