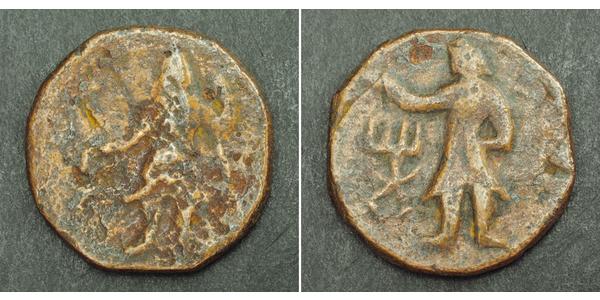 Reverse: God of metals Athsho standing facing, with head turned to left, one hand on hip, the other holding out diadem.

The Kushan Empire (Ancient Greek: Βασιλεία Κοσσανῶν; Bactrian: Κυϸανο, Kushano) was a syncretic empire, formed by the Yuezhi, in the Bactrian territories in the early 1st century. It spread to encompass much of Afghanistan,[16] and then the northern parts of the Indian subcontinent at least as far as Saketa and Sarnath near Varanasi (Benares), where inscriptions have been found dating to the era of the Kushan Emperor Kanishka the Great. Emperor Kanishka was a great patron of Buddhism. He played an important role in the establishment of Buddhism in the Indian subcontinent and its spread to Central Asia and China.

Kanishka I (Greco-Bactrian: κανηþκε Kanēške, Sanskrit: कनिष्क), or Kanishka the Great, an emperor of the Kushan dynasty in the second century (c. 127–150 CE), is famous for his military, political, and spiritual achievements. A descendant of Kujula Kadphises, founder of the Kushan empire, Kanishka came to rule an empire in Bactria extending to Pataliputra on the Gangetic plain. The main capital of his empire was located at Puruṣapura in Gandhara, with another major capital at Kapisa.

His conquests and patronage of Buddhism played an important role in the development of the Silk Road, and in the transmission of Mahayana Buddhism from Gandhara across the Karakoram range to China.

Earlier scholars believed that Kanishka ascended the Kushan throne in 78 CE, and that this date was used as the beginning of the Saka calendar era. However, historians no longer regard this date as that of Kanishka's accession. Falk estimates that Kanishka came to the throne in 127 CE.