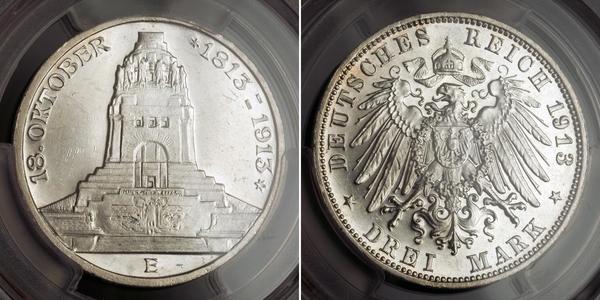 Reverse: Crown of the German Empire above the heraldic eagle of Germany with Prussian shield at chest and star order. Legend: DEUTSCHES REICH 1913 * DREI MARK *

The Battle of Leipzig or Battle of the Nations, fought on 16–19 October, 1813, was one of the most decisive defeats suffered by Napoleon Bonaparte. The Battle of Leipzig was fought on German soil and involved German troops on both sides, as a large proportion of Napoleon's troops actually came from the German Confederation of the Rhine. It is considered the largest battle in Europe before World War I, with over 500,000 troops involved.

Casualties on both sides were staggering; estimates range from 80,000 to 110,000 total killed or wounded. Napoleon lost about 38,000 killed and wounded. The Allies captured 15,000 able-bodied Frenchmen, 21,000 wounded or sick, 325 cannon and 28 eagles, standards or colours, and had received the men of the deserting Saxony divisions. Among the dead was Marshal Józef Antoni Poniatowski, a nephew to the last king of Poland, Stanisław August Poniatowski. The Pole, who had only received his marshal's baton the previous day, drowned trying to guard the French retreat. Corps commanders Lauriston and Reynier were captured. Fifteen French generals were killed and 51 wounded.

Out of a total force of 362,000, the Allies suffered approximately 54,000 casualties. Schwarzenberg's Bohemian Army lost 34,000, Blücher's Silesian Army lost 12,000, while Bernadotte's Army of North and Bennigsen's Army of Poland lost about 4,000 each.

The battle ended the First French Empire's presence east of the Rhine and brought the liberated German states over to the Coalition. The Coalition pressed its advantage and invaded France in early 1814. Napoleon was forced from the throne of France and exiled to the island of Elba.

In addition to the 91 m high Völkerschlachtdenkmal, the course of the battle in the city of Leipzig is marked by numerous monuments and the 45 Apel-stones that mark important lines of the French and allied troops.