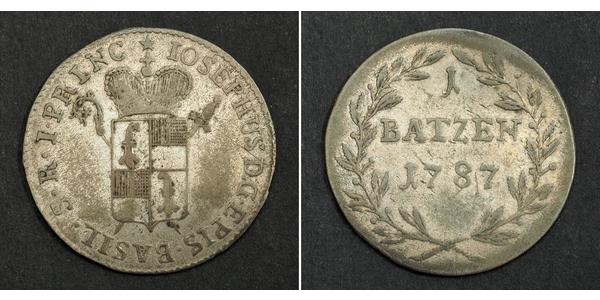 The Diocese of Basel (German: Bistum Basel; Latin: Dioecesis Basileensis) is a Roman Catholic diocese in Switzerland. Historically, the bishops of Basel were also secular rulers of the Prince-Bishopric of Basel(German: Fürstbistum Basel). The bishop of Basel has not resided in the city of Basel since 1528. Solothurn is the seat of the Bishop of Basel. Today the diocese of Basel includes the Swiss cantons of Aargau, Basel-Country, Basel-City, Berne, Jura, Lucerne, Schaffhausen, Solothurn, Thurgau, and Zug.

He was educated at the Jesuit gymnasium in Porrentruy.  He became a canon of Basel Münster in 1742, and then became its capitulary in 1750.

On November 25, 1782, the cathedral chapter of Basel Münster unanimously elected Roggenbach to be the new Prince-Bishop of Basel, with Pope Pius VI confirming his appointment on July 18, 1783. He was consecrated as a bishop by Raymond de Durfort, Archbishop of Besançon, on September 29, 1783.

Shortly after Roggenbach's election, revolutionary activity began in the prince-bishopric, encouraged by Roggenbach's auxiliary bishop, Jean-Baptiste-Joseph Gobel, a supporter of the sans-culottes. The French Revolution eventually spread into the prince-bishopric, and, following rioting in Porrentruy, Roggenbach fled the prince-bishopric on April 27, 1792, under the protection of Austrian troops, traveling first to Delémont, then to Biel, and finally to Konstanz. On December 17, 1792, the French First Republic incorporated the northern part of the Prince-Bishopric of Basel into a new client state known as the Rauracian Republic.