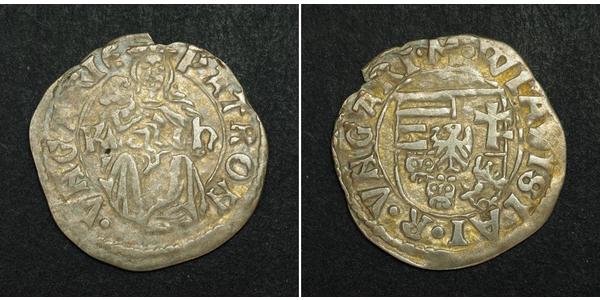 Vladislas II, also known as Ladislaus Jagiellon (Czech: Vladislav Jagellonský, Hungarian: II. Ulászló, Polish: Wladyslaw II Jagiellonczyk, Croatian: Vladislav Jagelovic, Slovak: Vladislav Jagelovský); (1 March 1456, Kraków, Poland – 13 March 1516, Buda, Hungary) was King of Bohemia from 1471 and King of Hungary from 1490 until his death in 1516. He was also a knight of the Order of the Dragon

Vladislaus was born on 1 March 1456, the son of King Casimir IV of Poland and Great Duke of Lithuania, the then head of the ruling Jagiellon dynasty of Poland, and of Elizabeth of Bohemia, daughter of Albert II of Germany. He was christened as the namesake of his grandfather King Wladyslaw Jagiello of Poland, maternal uncle King Ladislaus the Posthumous of Bohemia and his late paternal uncle Wladyslaw III of Poland, an earlier king of Hungary.

The period after the death of George of Podebrady was a time of conflict for the Bohemian throne and Vladislaus was unable to confront it. At the time of his arrival in Prague, he was only fifteen years old and significantly dominated by his advisers. The succession conflict was settled in 1479 in the Peace of Olomouc, which allowed both Vladislaus and Matthias Corvinus to use the title "King of Bohemia." Vladislaus would reign in Bohemia proper, while Matthias gained Moravia, Silesia, and the two Lusatias. The deal also stipulated that in case of Matthias' death, Vladislaus would pay 400,000 gold (contemporary currency, not "gold") for the entirety of the Bohemian lands. However, this payment was not made once Vladislaus became King of Hungary after the death of Matthias.

The "Kutnohorian deal" in 1485 practically eliminated Vladislaus' power and granted it to the nobles. The deal in its original form would have been in effect for 31 years, but was extended in 1512 to "all times." He was a cheerful man, nicknamed "Vladislaus Bene" (Polish: Wladyslaw Dobrze, Hungarian: Dobzse László, Czech: král Dobre) because to almost any request he answered, "Bene" (Latin for "(It's) well"). During his reign (1490–1516), the Hungarian royal power declined in favour of the Hungarian magnates, who used their power to curtail the peasants' freedom. His reign in Hungary was largely stable, although Hungary was under consistent border pressure from the Ottoman Empire and went through the revolt of György Dózsa. On March 11 1500 Czech Council adopted a new municipal constitution that limited royal power and Vladislav signed it in 1502 (hence it is known as Vladislav municipal constitution).

He was married three times, first in 1476 at Frankfurt/Oder to Barbara of Brandenburg, daughter of Albert III Achilles, Elector of Brandenburg, child widow of Silesian Piast Henry XI of Glogów, then to the widow of Matthias, Beatrice of Naples, daughter of Ferdinand I of Naples. His third wife was Anne de Foix, who finally gave birth to his only surviving legitimate children, Anna of Bohemia and Hungary and Louis II of Hungary and Bohemia. Vladislaus died on 13 March 1516, and was buried in Székesfehérvár.

Vladislaus' ten-year-old son Louis succeeded him on the thrones of both Bohemia and Hungary. His daughter Anna was married in 1515 to the future emperor Ferdinand of Austria, a grandson of Emperor Maximilian I Habsburg. Therefore, after the death of Louis at the Battle of Mohács, the succession devolved through Anna to the cadet line of eastern Habsburgs.