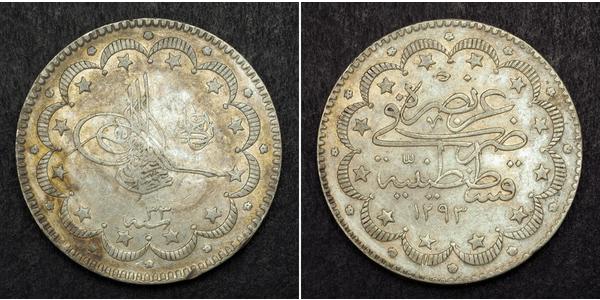 The "el-Ghazi"   title (Warrior of the Islamic faith) was often awarded as a title in recognition for valor in battle.

His Imperial Majesty, The Sultan Abdülhamid II, Emperor of the Ottomans, Caliph of the Faithful, (AKA: Abdul Hamid II or Abd Al-Hamid II Khan Ghazi), (Ottoman Turkish: `Abdü'l-?amid-i sânî, Turkish: Ikinci Abdülhamit) (21/22 September 1842 – 10 February 1918) was the 34th sultan of the Ottoman Empire. He oversaw a period of decline in the power and extent of the Empire, ruling from 31 August 1876 until he was deposed on 27 April 1909. Abdülhamid II was the last Ottoman Sultan to rule with absolute power.

Known to some as the Ulu Hakan ("Great Khan"), he is also known in the West as "The Red Sultan" (Kizil Sultan). His deposition following the Young Turk Revolution was hailed by most Ottoman citizens, who welcomed the return to constitutional rule.

Abdülhamid commissioned thousands of photographs of his empire. Fearful of assassination, he did not travel often (though still more than many previous rulers) and photographs provided visual evidence of what was taking place in his realm. The Sultan presented large gift albums of photographs to various governments and heads of state, including the United States (William Allen, "The Abdul Hamid II Collection," History of Photography eight (1984): 119-45.) and Great Britain (M. I. Waley and British Library, "Sultan Abdulhamid II Early Turkish Photographs in 51 Albums from the British Library on Microfiche" (Zug, Switzerland: IDC, 1987). The American collection is housed in the Library of Congress and has been digitized. *Ottoman Empire photographs at the Library of Congress.