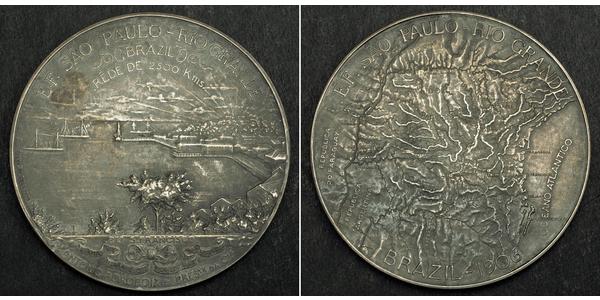 Rio Grande  (Portuguese for "great river") is a river in south-central Brazil. It rises in the Mantiqueira Mountains in the state of Minas Gerais and descends inland, west-northwestward. Its lower course marks a portion of the Minas Gerais-São Paulo border. At the Mato Grosso do Sul state border, after a course of 1,090 km (677 mi),  it joins the Paranaíba River to form the Upper Paraná River.

Major tributaries of the Rio Grande are:

The river plays a major role in production of electricity and, due to rapids and waterfalls, and absence of locks, is only navigable by small craft in limited stretches. However the Estrada de Ferro Oeste de Minas (a narrow gauge railway) operated a passenger and freight steam navigation service between 1889 and 1963. The EFOM met the Rio Grande at Ribeirão Vermelho, from where the service ran down the river for 208 km (129 mi), as far as Capetina. There were six stations on the river between Ribeirão Vermelho and Capetinga, and the railway operated a fleet of 6 stern-wheel paddle steamers, together with barges and launches. The service was halted by the completion of the Furnas Dam.