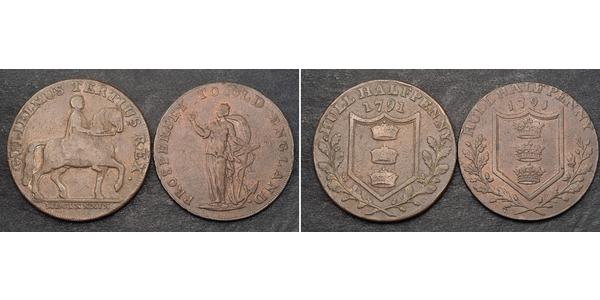 Kingston upon Hull, usually abbreviated to Hull, is a port city and unitary authority in the East Riding of Yorkshire, England. It lies upon the River Hull at its confluence with the Humber Estuary, 25 miles (40 km) inland from the North Sea, 50 miles (80 km) east of Leeds, 34 miles (55 km) south-east of York and 54 miles (87 km) north-east of Sheffield. With a population of 259,778 (mid-2019 est.), Hull is the fourth-largest city in the Yorkshire and the Humber region.

Conder tokens, also known as 18th-century provincial tokens, were a form of privately minted token coinage struck and used during the latter part of the 18th century and the early part of the 19th century in England, Anglesey and Wales, Scotland, and Ireland.

The driving force behind the need for token coinage was the shortage of small denomination coins for everyday transactions. However, the demand was fueled by other factors such as the Industrial Revolution, population growth, and the preponderance of counterfeit circulating coins. Because the government made little effort to ameliorate this shortage, private business owners and merchants took matters into their own hands, and the first tokens of this type were issued in 1787 to pay workers at the Parys Mine Company. By 1795, millions of tokens of a few thousand varying designs had been struck and were in common use throughout Great Britain.

Collecting Conder tokens has been popular since shortly after they were first manufactured, resulting in the availability today of many highly preserved examples for collectors. The demarcation of what is or is not considered a Conder token is somewhat unclear; however, most collectors consider Conder tokens to include those indexed originally by James Conder[2] or later by Dalton & Hamer.