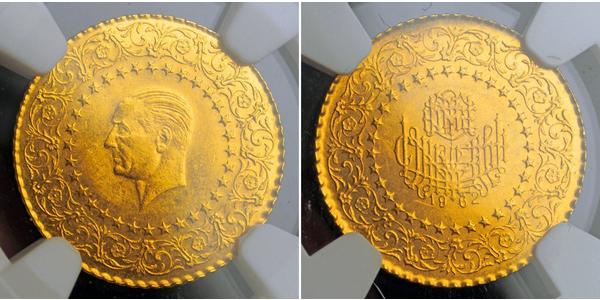 Obverse: Head of Mustafa Kemal Atatürk (Ottoman and Turkish army officer and the first President of Turkey) within a circle of stars. Decorative floral border around.

The Republic of Turkey was created after the overthrow of Sultan Mehmet VI Vahdettin by the new Republican Parliament in 1922. This new regime delivered the coup de grâce to the Ottoman state which had been practically wiped away from the world stage following the First World War.  The history of modern Turkey begins with the foundation of the republic on October 29, 1923, with Mustafa Kemal (Atatürk) as its first president. The government was formed from the   Ankara-based revolutionary group, led by Mustafa Kemal Atatürk and his   colleagues. The second constitution was ratified by the Grand National Assembly on April 20, 1924.

Mustafa Kemal Atatürk (, 19 May 1881 by a posteriori –10 November 1938) was an Ottoman and Turkish army officer, revolutionary statesman, writer, and the first President of Turkey. He is credited with being the founder of the Republic of Turkey.

Atatürk was a military officer during World War I. Following the defeat of the Ottoman Empire in World War I, he led the Turkish national movement in the Turkish War of Independence. Having established a provisional government in Ankara, he defeated the forces sent by the Allies. His military campaigns gained Turkey independence. Atatürk then embarked upon a program of political, economic, and cultural reforms, seeking to transform the former Ottoman Empire into a modern, westernized and secular nation-state. The principles of Atatürk's reforms, upon which modern Turkey was established, are referred to as Kemalism.