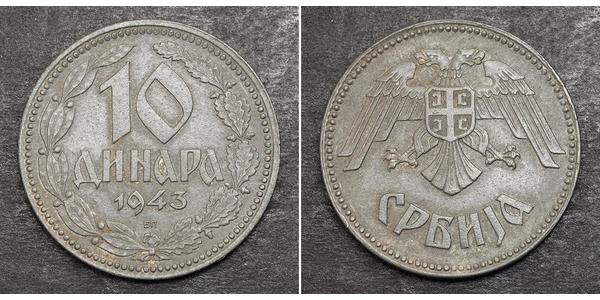 The Territory of the Military Commander in Serbia (German: Gebiet des Militärbefehlshabers in Serbien) was the area of the Kingdom of Yugoslavia that was placed under a military government of occupation by the Wehrmacht following the invasion, occupation and dismantling of Yugoslavia in April 1941. The territory included Serbia proper, with the addition of the northern part of Kosovo (around Kosovska Mitrovica), and the Banat. This territory was the only area of the partitioned Kingdom of Yugoslavia in which the German occupants established a military government. This was due to the key rail and riverine transport routes that passed through it, and its valuable resources, particularly non-ferrous metals. On 22 April 1941, the territory was placed under the supreme authority of the German military commander in Serbia, which included a series of generals, with the day-to-day administration   of the territory under the control of the chief of the Military   Administration in Serbia. Initially, the chief of the military   administration in Serbia was Harald Turner and later Franz Neuhausen.   The lines of command and control in the occupied territory were never   unified, and were made more complex by the appointment of direct   representatives of senior Nazis such as Reichsführer-SS Heinrich Himmler (for SS and police matters) and Reichsmarschall Hermann Göring (for economic matters). The Germans used Bulgarian troops to assist in   the occupation, but they were at all times under German control. Some sources describe the territory as a puppet state, or a "special administrative province", with other sources describing it as having a puppet government.

The Military Commander in Serbia appointed the Serbian civil puppet governments to "carry on administrative chores under German direction and supervision". The first of these was the short-lived Commissioner Administration (Комесарска влада, Komesarska vlada) which was established under Milan Aćimović on 30 May 1941. The Military Commander in Serbia "appointed a low-grade   Serbian administration of ten commissioners who were put in charge of   the ministries, under the control of Turner and Neuhausen, as a simple   instrument of the occupation regime", that "lacked any semblance of power". It was followed by the establishment of the Government of National Salvation (Влада Националног Спаса, Vlada Nacionalnog Spasa) under Milan Nedić, which replaced the Commissioner Administration on 29 August 1941. According to historian Professor Stevan K. Pavlowitch, the Nedić regime itself "had no status under international law, and no power beyond that delegated by the Germans", and "was simply an auxiliary organ of the German occupation regime". The one area in which the regime did exercise initiative and achieve   success was in the reception and care of hundreds of thousands of Serb   refugees from other parts of partitioned Yugoslavia. While the Aćimović administration was limited to the use of the former   Yugoslav gendarmerie, the Nedić government was authorised to raise an   armed force, the Serbian State Guard, to impose order, but they essentially functioned as German auxiliaries until the German withdrawal in October 1944. The Germans also raised several other local auxiliary forces for various purposes within the territory. The Government of National Salvation remained in place until the German   withdrawal. Throughout the occupation, the Banat was an autonomous   region, formally responsible to the puppet governments in Belgrade, but   in practice governed by its Volksdeutsche (ethnic German) minority. In order to secure the Trepča mines and the Belgrade-Skopje railway,   the Germans made an arrangement with Albanian collaborators in the   northern tip of present-day Kosovo which resulted in the effective   autonomy of the region from the puppet government in Belgrade, which   later formalized the German arrangement.