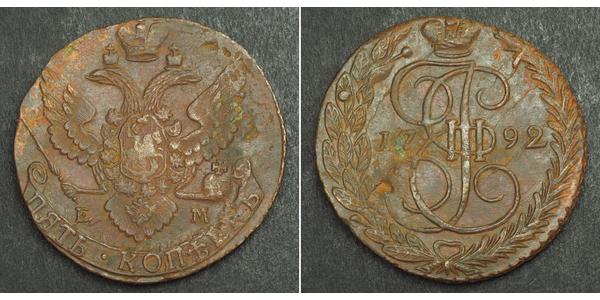 During her reign Catherine extended the borders   of the Russian Empire southward and westward to absorb New Russia,   Crimea, Right-Bank Ukraine, Belarus, Lithuania, and Courland at the   expense of two powers- the Ottoman Empire and the Polish-Lithuanian   Commonwealth. All told, she added some 200,000 miles² (518,000 km²) to   Russian territory.

Catherine's father, Christian August, Prince of   Anhalt-Zerbst, held the rank of a Prussian general in his capacity as   Governor of the city of Stettin (now Szczecin, Poland) in the name of   the king of Prussia. Though born as Sophia Augusta Frederica (Sophia Friederike Auguste von Anhalt-Zerbst, nicknamed "Figchen"), a   minor German princess in Stettin, Catherine did have some (very remote)   Russian ancestry, and two of her first cousins became Kings of Sweden:   Gustav III and Charles XIII. In accordance with the custom then   prevailing amongst the German nobility, she received her education   chiefly from a French governess and from tutors.

The choice of Sophia as wife of the prospective tsar-   Peter of Holstein-Gottorp- resulted from some amount of diplomatic   management in which Count Lestocq and Frederick II of Prussia took an   active part. Lestocq and Frederick wanted to strengthen the friendship   between Prussia and Russia in order to weaken the influence of Austria   and ruin the chancellor Bestuzhev, on whom Tsarina Elizabeth relied, and   who acted as a known partisan of Russo-Austrian co-operation.

The diplomatic intrigue failed, largely due to the   intervention of Sophie's mother, Johanna Elisabeth of Holstein-Gottorp, a   clever and ambitious woman. Historical accounts portray Catherine's   mother as emotionally cold and physically abusive, as well as a social   climber who loved gossip and court intrigues. Johanna's hunger for fame   centered on her daughter's prospects of becoming empress of Russia, but   she infuriated Empress Elizabeth, who eventually banned her from the   country for spying for King Frederick of Prussia (reigned   1740Ã¢â‚¬â€œ1786). Nonetheless, Elizabeth took a strong liking to the   daughter, and the marriage finally took place in 1745. The empress knew   the family well because she had intended to marry Princess Johanna's   brother Charles Augustus (Karl August von Holstein), who had died of   smallpox in 1727 before the wedding could take place.

Princess Sophia spared no effort to ingratiate   herself not only with the Empress Elizabeth, but with her husband and   with the Russian people. She applied herself to learning the Russian   language with such zeal that she rose at night and walked about her   bedroom barefoot repeating her lessons(though she mastered the language ,   she still had her accent). This resulted in a severe attack of   pneumonia in March 1744. When she wrote her memoirs she represented   herself as having made up her mind when she came to Russia to do   whatever seemed necessary, and to profess to believe whatever required   of her, in order to become qualified to wear the crown. The consistency   of her character throughout life makes it highly probable that even at   the age of fifteen she possessed sufficient maturity to adopt this   worldly-wise line of conduct.

Her father, a very devout Lutheran, strongly opposed   his daughter's conversion. Despite his instructions, on June 28, 1744   the Russian Orthodox Church received her as a member with the name   Catherine (Yekaterina or Ekaterina) and the   (artificial) patronymic (Alekseyevna). On the following day the formal   betrothal took place, and Catherine married the Grand Duke Peter on   August 21, 1745 at Saint Petersburg. The newlyweds settled in the palace   of Oranienbaum, which would remain the residence of the "young court"   for 56 years.

The unlikely marriage proved unsuccessful- due to the   Grand Duke Peter's impotence and immaturity, he may not have   consummated it for 12 years. While Peter took a mistress (Elizabeth   Vorontsova), Catherine carried on liaisons with Sergei Saltykov, Charles   Hanbury Williams and Stanislaw August Poniatowski. She became friends   with Ekaterina Vorontsova-Dashkova, the sister of her husband's   mistress, who introduced her to several powerful political groups that   opposed her husband. Catherine read widely and kept up-to-date on   current events in Russia and in the rest of Europe. She corresponded   with many of the prominent minds of her era, including Voltaire and   Diderot.

After the death of the Empress Elizabeth on 5 January   1762 [O.S. 25 December 1761], Peter succeeded to the throne as Peter   III of Russia and moved into the new Winter Palace in Saint Petersburg;   Catherine thus became Empress Consort of Russia. However, the new tsar's   eccentricities and policies, including a great admiration for the   Prussian king, Frederick II, alienated the same groups that Catherine   had cultivated. Compounding matters, Peter intervened in a dispute   between Holstein and Denmark over the province of Schleswig (see Count   Johann Hartwig Ernst von Bernstorff). Peter's insistence on supporting   his native Holstein in an unpopular war eroded much of his support among   the nobility.

In July 1762, Peter committed the political error of   retiring with his Holstein-born courtiers and relatives to Oranienbaum,   leaving his wife in Saint Petersburg. On July 13 and July 14 the Leib   Guard revolted, deposed Peter, and proclaimed Catherine the ruler of   Russia. The bloodless coup succeeded; Ekaterina Dashkova, a confidante   of Catherine, remarked[citation needed] that Peter seemed rather glad to have rid himself of the throne, and   requested only a quiet estate and his mistress. Six months after his   accession to the throne and three days after his deposition, on July 17,   1762, Peter III died at Ropsha at the hands of Alexei Orlov (younger   brother to Gregory Orlov, then a court favorite and a participant in the   coup). Soviet-era historians assumed that Catherine had ordered the   murder, as she also disposed of other potential claimants to the throne   (Ivan VI and Princess Tarakanova) at about the same time, but many   modern historians believe that she had no part in it.

Catherine, although not descended from any previous   Russian emperor, succeeded her husband, following the precedent   established when Catherine I succeeded Peter I in 1725. Her   accession-manifesto justified her succession by citing the "unanimous   election" of the nation. However a great part of nobility regarded her   reign as a usurpation, tolerable only during the minority of her son,   Grand Duke Paul. In the 1770s a group of nobles connected with Paul   (Nikita Panin and others) contemplated the possibility of a new coup to   depose Catherine and transfer the crown to Paul, whose power they   envisaged restricting in a kind of constitutional monarchy. However,   nothing came of this, and Catherine reigned until her death.