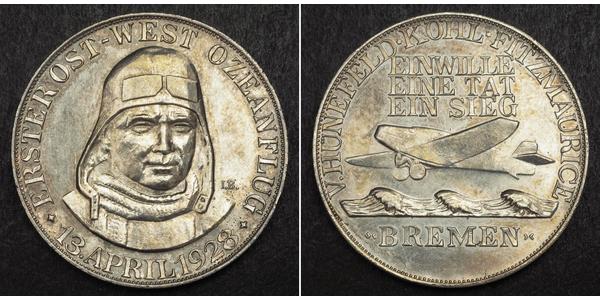 For your consideration a scarce silver medal, struck in Berlin (Germany),  commemorating the first east-west crossing of the Atlantic by  "The Crazy Baron" (Ehrenfried Günther Freiherr von Hünefeld), in a  modified Junkers W33, Bremen. A beautiful historical medal and a great addition!

Ehrenfried Günther Freiherr von Hünefeld (May 1, 1892 – February 5, 1929) was a German Aviation pioneer and initiator of the first trans-atlantic flight in East-West direction.

Hünefeld was born in Königsberg, East Prussia, German Empire as the son of the owner of Braxeinswalde near Pr.Eylau,  where he grew up. He was blind on his left eye and nearsighted on his  right, his childhood was characterized by several serious diseases.  After finishing school at Berlin, he started to study at the Berlin University and came in contact to the first flight pioneers at Berlin Johannisthal Air Field. At the beginning of World War I he volunteered to the German Air Service,  but was rejected due to his poor health. After that he volunteered  again as a motorcyclist and was wounded in September 1914 at Flanders,  which led to a shortened left leg. Due to his handicaps he could not  return to service and joined the German Diplomatic Service at Sofia, Constantinople and as a Imperial Vice Consul in the Netherlands. After the end of World War I he stayed in the Netherlands for one and a half year with the German Crown Prince Wilhelm, then he went back to Germany, where he worked as Spokesman of the North German Lloyd in Bremen.

After Charles Lindbergh crossed the Atlantic in West-East direction in May 1927, the idea of  starting in Europe to cross in East-West direction, which is more  difficult because of the dominating wind conditions, became more and  more popular. In 1927 Hünefeld bought two Junkers W33 planes of Junkers (Aircraft) in Dessau, naming them after the two North German Lloyd Flagship projects "Bremen" and "Europa". His plans were supported by Hugo Junkers and Hermann Köhl, a World War I pilot and head of the Lufthansa Nightflight Branch. After some test flights, breaking the record of  flight duration, Hünefeld and Köhl started in April 1928 and flew to Baldonnel, Ireland, where they met James C. Fitzmaurice, the Irish Air Corps Commandant of the Baldonnel Airodrome. On April 12, 1928 these three men left Baldonnel with the Bremen and managed to cross the Atlantic Ocean, landing at Greenly Island at the Southcoast of Labrador, Canada. Even though they missed their initial aim, New York, they were the first to cross the Atlantic from Europe to America.