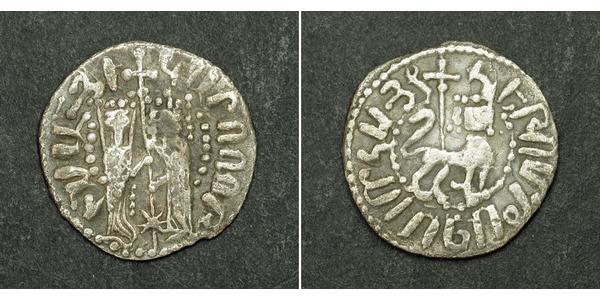 Obverse: Queen Zabel and King Hetoum standing facing, holding a long cross between them. Legend (translated): "+ By the will of God"

Reverse: Crowned lion to right. Long cross behind him. Legend (translated): "+ Hetoum King of the Armenians"

The Armenian Kingdom of Cilicia (Middle Armenian: Կիլիկիոյ Հայոց Թագաւորութիւն, Giligio Hayoc’ T’akavorut’iun), also known as Cilician Armenia (Armenian: Կիլիկեան Հայաստան, Giligian Hayastan), Lesser Armenia, or New Armenia  and formerly known as the Armenian Principality of Cilicia (Armenian: Կիլիկիայի հայկական իշխանութիւնը), was an Armenian state formed during the High Middle Ages by Armenian refugees fleeing the Seljuk invasion of Armenia. Located outside the Armenian Highlands and distinct from the Kingdom of Armenia of antiquity, it was centered in the Cilicia region northwest of the Gulf of Alexandretta.

The kingdom had its origins in the principality founded c. 1080 by the Rubenid dynasty, an alleged offshoot of the larger Bagratid family, which at various times had held the thrones of Armenia and Georgia. Their capital was originally at Tarsus, and later became Sis. Cilicia was a strong ally of the European Crusaders, and saw itself as a bastion of Christendom in the East. It also served as a focus for Armenian nationalism and culture, since Armenia proper was under foreign occupation at the time. Cilicia's significance in Armenian history and statehood is also attested by the transfer of the seat of the Catholicos of the Armenian Apostolic Church, spiritual leader of the Armenian people, to the region.

In 1198, with the crowning of Leo the Magnificent of the Rubenid dynasty, Cilician Armenia became a kingdom.

In 1226, the crown was passed to rival Hethumids through Leo's daughter Isabella's second husband, Hethum I. As the Mongols conquered vast regions of Central Asia and the Middle East, Hethum and succeeding Hethumid rulers sought to create an Armeno-Mongol alliance against common Muslim foes, most notably the Mamluks. In the thirteenth and fourteenth centuries, the Crusader states and the Mongol Ilkhanate disintegrated, leaving the Armenian Kingdom without any regional allies. After relentless attacks by the Mamluks in Egypt in the fourteenth century, the Cilician Armenia of the Lusignan dynasty, mired in an internal religious conflict, finally fell in 1375.

Commercial and military interactions with Europeans brought new Western influences to the Cilician Armenian society. Many aspects of Western European life were adopted by the nobility including chivalry, fashions in clothing, and the use of French titles, names, and language. Moreover, the organization of the Cilician society shifted from its traditional system to become closer to Western feudalism. The European Crusaders themselves borrowed know-how, such as elements of Armenian castle-building and church architecture. Cilician Armenia thrived economically, with the port of Ayas serving as a center for East-West trade.

Hethum I (1213 – 21 October 1270) (also transliterated Hethoum, Hetoum, Het'um, or Hayton from Armenian: Հեթում Ա) ruled the Armenian Kingdom of Cilicia (also known as "Little Armenia") from 1226 to 1270. He was the son of Constantine, Lord of Baberon (d. 1263) and Princess Alix Pahlavouni of Lampron (a third-cousin of Leo I) and was the founder of the dynasty which bears his name: the Hetoumids. Due to diplomatic relations with the Mongol Empire, Hethum himself traveled to the Mongol court in Karakorum, Mongolia,[1] which was recorded in the famous account The Journey of Haithon, King of Little Armenia, To Mongolia and Back by Hetoum's companion, the Armenian historian Kirakos Gandzaketsi.