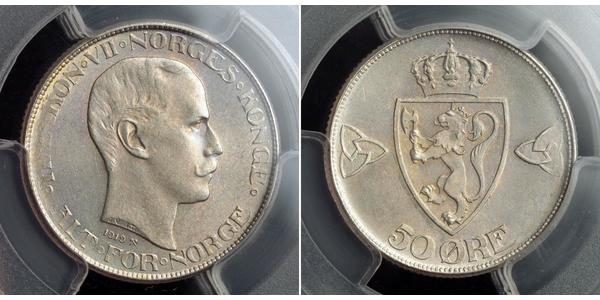 Haakon VII (Prince Carl of Denmark and Iceland, born Christian Frederik Carl Georg Valdemar Axel) (3 August 1872 –  21 September 1957), known as Prince Carl of Denmark until 1905, was the first king of Norway after the 1905 dissolution of the personal union with Sweden. He was a member of the House of Schleswig-Holstein-Sonderburg-Glücksburg. As one of the few elected monarchs, Haakon quickly won the respect and affection of his people and played a pivotal role in uniting the Norwegian nation in its resistance to the Nazi invasion and subsequent five-year-long occupation of his country during World War II.

In Norway, Haakon is regarded as one of the greatest Norwegians of   the twentieth century and is particularly revered for his courage during   the German invasion—he threatened abdication if the government cooperated with the invading Germans—and for his   leadership and preservation of Norwegian unity during the Nazi   occupation. He died at the age of 85 on 21 September 1957, after having   reigned for nearly 52 years.