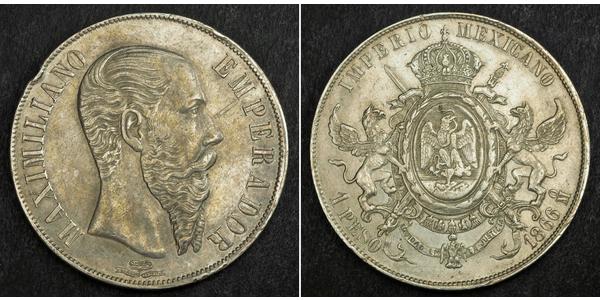 A beautiful  and popular coin, of the short-lived Mexican Empire of Maximilian I (brother of Emperor Franz Joseph I. of Austria).

Maximilian I of Mexico (6 July 1832 – 19 June 1867; born Archduke Ferdinand Maximilian Joseph of Austria) was a member of the Imperial House of Habsburg-Lorraine. After a distinguished career in the Austrian Navy he was proclaimed Emperor of Mexico, during the Second Mexican Empire, with the backing of Napoleon III of France and a group of Mexican monarchists on 10 April 1864. Many foreign governments refused to recognize his government, including the United States. This helped to ensure the success of Republican forces led by Benito Juárez, and Maximilian was executed, after capture by Republicans, in 1867. In Mexico, he and his consort are known as Maximiliano and Carlota.