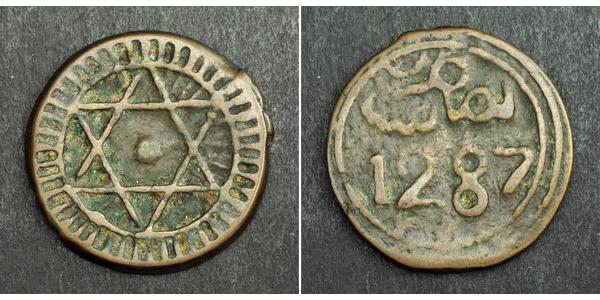 Morocco has a very important strategic location, as a gateway to western Europe. This has resulted in the nation being attacked and subjugated by many invaders from the Phoenicians and Romans to the more modern French and Spanish. At the time of the mintage of this coin, Morocco was under French control. Of interest, is the fact that Morocco was the first nation to recognize the sovereignity of the United States in 1777.

Born in Fez, Moulay Muhammad was a son of the Alawite sultan Abd al-Rahman of Morocco. During his father's reign, Muhammad commanded the Moroccan army which was defeated by the French at the Battle of Isly in August 1844.

After the defeat, with his father's permission, Moulay Muhammad used   his capacity as army chief to launch on a series of significant military   reforms in 1845. He invited a group of Tunisian officers who had served in the Ottoman army to raise and train the first European-style regiment, the askari, as a supplement to the usual palace guards (abid) and tribal troops (ghish and nu'aib). Muhammad IV set up the madrasa al-Muhandisin, a military engineering school in Fez, supervised by the renegade French Count Joseph de Saulty (an artillery officer from Algiers, de Saulty defected after an amorous   entanglement, and converted, taking up the name Abd al-Rahman al-Ali). Muhammad IV hired writers to translate various European textbooks on   engineering and science. He was personally involved in the translation   of the works of scientists such as Legendre, Newton and Lalande. He also struck deals with British Gibraltar and Egypt to receive regular contingents of Moroccan soldiers for artillery training.

Immediately upon ascension to throne in August 1859, Muhammad IV was faced with his first test, the Spanish-Moroccan War (1859). Raids by irregular tribesmen on the Spanish enclaves of Ceuta and Mellila in northwest Morocco prompted Spain to demand an expansion of the borders of its enclave around Ceuta. When   this was refused by Muhammad IV, Spain declared war. The Spanish navy   bombarded Tangier, Asilah and Tetouan. A large Spanish expeditionary force landed in Ceuta, which subsequently went on to defeat the Moroccan army at the Battle of Tétouan in February 1860. The humiliating Treaty of Wad Ras signed in April 1860 expanded the enclaves, but more worrisomely   imposed a large inemnity payment on Morocco of 100 million francs,   twenty times the government's budget. Provisions allowed the Spanish to hold Tetouan until it was paid. The treaty also ceded the enclave of Sidi Ifni, in southwestern Morocco, to Spain.

After the disappointment of defeat and the crushing financial burden   of the Spanish treaty, Muhammad IV gradually retired into passivity,   dedicating himself to scholarly and intellectual interests in   mathematics, geometry, astronomy, poetry and music, and leaving   political affairs to be handled by his palace slave and effective vizier, Si Moussa.

As by treaty, half of the customs duties of all Moroccan ports were designated to pay the Spanish debt, the Alawite sultan's government (the Makhzen) was faced with a critical financial situation, and launched the process of "qaidization". Traditionally, the Makhzen had an understanding with the   semi-autonomous rural tribes, whereby the tribal leaders agreed to hand   over a portion of the taxes they collected and to supply tribesmen to   the sultan's army in times of war, but otherwise were left to manage   their own affairs. The new financial difficulties from the colonial   encroachment prompted the Makhzen to demand ever-greater exactions of   troops and taxes from the tribes. As the tribes balked and began to   refuse the higher taxes, the sultan decided to circumvent the elected   tribal leaders (amghars), refusing to ratify their credentials, and instead appointed qaids (lords) of his own choosing, imposing them upon the tribes. The qaids   were rarely of the same tribal stock as the tribes they governed, but   were instead ambitious men, chosen primarily for their ruthless ability   to crush rebellion and force the tribes to cough up. Initially designed   as a centralizing move, this eventually backfired, as the qaids, once   esconsed in their tribal fiefs, proved even more ungovernable than the   amghars had ever been. During Muhammad IV's reign, Morocco began   essentially careening into feudalism, a process that accelerated during the reign of his successor, Hassan I.