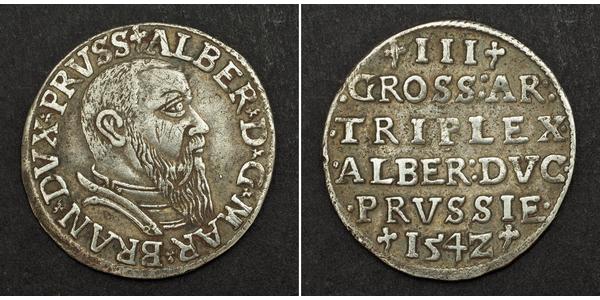 Although having received relatively little recognition in German history, Albert's dissolution of the Teutonic State caused him to found the Duchy of Prussia, as well as the Hohernzollern dynasty, which would eventually become arguably the most powerful European nation and unite the whole of Germany. Therefore, Albert is often seen as the father of the Prussian nation, and even in some ways indirectly responsible for the unification of Germany. He must have been a skilled political administrator and leader, as he was able to effectively reverse the decline of the Teutonic Order, until he supposedly "betrayed" them by transforming their lands into his own duchy, ousting them in the process. Among his other visible legacies include founding the University of Konigsberg, and being the first German Noble to support Luther's ideas.

Albert (German: Albrecht; Latin: Albertus; 16 May 1490 - 20 March 1568) was the 37th Grand Master of the Teutonic Knights and, after converting to Lutheranism, the first duke of the Duchy of Prussia, which was the first state to adopt the Lutheran faith and Protestantism as the official state religion. Albert proved instrumental in the political spread of Protestantism in its early stage.

Because Albert was a member of the Brandenburg-Ansbach branch of the House of Hohenzollern, it had been hoped that his election as Grand Master would reverse the decline of the Teutonic Knights since 1410; Duke Frederick of Saxony of the House of Wettin had been elected for the same reason. Instead, Albert's secularization of the Prussian territories of the Order eventually led to the inheritance of the Duchy of Prussia by the Margraviate of Brandenburg.

Albert's titles (on his proclamation of 1561 in Koenigsberg) were: Albert the Elder, Margrave of Brandenburg in Prussia, Stettin in Pomerania, Duke of the Kashubians, and Wends, Burgrave of Nuremberg, and Count of RÃ¼gen etc.