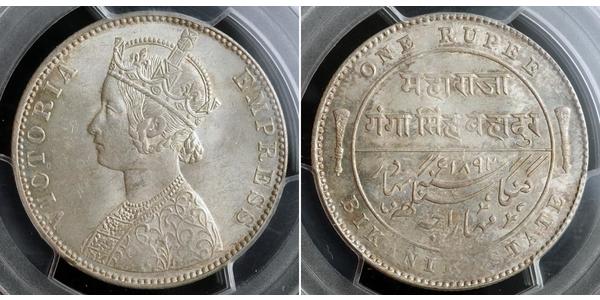 Bikaner is a city in the northwest of the state of Rajasthan, India. It is located 330 kilometres (205 mi) northwest of the state capital, Jaipur. Bikaner city is the administrative headquarters of Bikaner District and Bikaner division. Formerly the capital of the princely state of Bikaner, the city was founded by Rao Bika in 1486 and from its small origins it has developed into the fourth largest city in Rajasthan. The Ganges Canal, completed in 1928, and the Indira Gandhi Canal, completed in 1987, facilitated its development. The city celebrates its foundation day on Akshaya Tritiya by flying kites and eating special Rajasthani food that includes Bajre Ka Khichda and Imli ka Paani (Tamarind Water) among other snacks. The celebration lasts for two days, known as Chhoti Akha Teej and Badi Akha Teej. People can be seen flying kites during these two days right from the early morning at 5-6am till late sunset. Given the extreme desert weather, standing for long hours under the bright Sun is a torture in itself. Hence, a quick home-made drink like Tamarind Water really helps in controlling body temperature and prevents from heat stroke.

His Highness General Maharaja Sir Ganga Singh (October 3, 1880, Bikanerâ€“2 February 1943, Bombay), was the ruling Maharaja of the princely state of Bikaner (in present-day Rajasthan, India) from 1888 to 1943. He is widely remembered as a modern reformist visionary, and he was also the only 'non-White' member of the British Imperial War Cabinet during World War I.

Sri Ganga Singh was born on October 3, 1880, the third and youngest son of His Highness Maharaja Sri Lal Singh, and brother to Sri Dungar Singh.

Succeeding his brother on December 16, 1888, he was initially educated privately, then at Mayo College, Ajmer from 1889 to 1894. From 1895 to 1898, he was put under the guidance of Thakur Saheb Lall Singh Ji "Churu" for administrative training, learning administrative work from that of Patwari to that of Prime Minister.

For military training, he was sent to Deoli in 1898 and attached to the 42nd Deoli Regiment, which had the reputation of being one of the finest regiments in India under the command of Lt. Col. Bell. During the first World War, he commanded the Bikaner Camel Corps which served in France, Egypt and Palestine.

As a ruler, he established a Chief Court in Bikaner, presided over by a Chief Judge who was assisted by two judges. Bikaner was the first State in Rajasthan to take such a step. He announced the establishment of a Representative Assembly in 1913. He later established a High Court with a Chief Justice and two sub-judges by an edict in 1922. Maharaja Ganga Singhji was the first prince in Rajputana to grant full charter of powers to a high court.

A life insurance and Endowment Assurance Scheme was introduced for the benefit of the employees. Also, facilities of a saving bank were made available to the people. He was one of the first rulers to introduce through legislation a Sharda Act by which child marriages were stopped.

He had a personal gun salute of 19-guns granted in 1918 and a permanent local gun salute of 19-guns granted in 1921. He was the Hon. ADC to HRH The Prince of Wales in 1902, later serving him when he became His Majesty King George V, the King-Emperor, in 1910. A Member of the Central Recruiting Board-India 1917, he represented India at the Imperial War Conference 1917, the Imperial War Cabinet and the Paris Peace Conference 1919 and was Chancellor of the Indian Chamber of Princes from 1920-26. He also represented India as a delegate at the fifth session of the League of Nations in 1924.

He married 1stly in July 1897 HH Maharani Vallabhkuver Sahiba of Pratapgarh; she died 19 August 1906. He then married 2ndly HH Maharani Sri Bhatiyaniji Sahiba of Bikamkor and had issue, four sons and two daughters. He died 2 February 1943 in Bombay after a reign of 56 years, aged 62, and was succeeded by his son Sadul Singh.