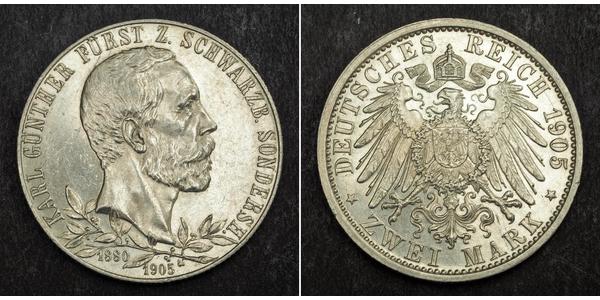 In 1850 Prince Charles Gonthier enrolled at the University of Bonn to begin his studies in law and literature. Also in 1850, he embarked upon a career in the Prussian Army, being appointed an Oberleutnant. Two years later he was promoted to the rank of Rittmeister before once gaining promotion to the rank Major in 1855.

On 17 July 1880, following the abdication of his father due to an eye condition, Hereditary Prince Charles Gonthier succeeded him as ruling prince and head of the House of Schwarzburg. During his reign, he made advancements to the education system of the principality, opening a state school and teacher-training facility.

As the marriage of Prince Charles Gonthier was childless, the heir presumptive to the throne was his younger brother, Prince Leopold. In 1890 the two brothers caused a scandal in Germany when they came to blows after Prince Leopold, who desired to marry, took offence to his brother's suggestion that he marry a commoner if no royal woman would agree to marry him.

As his brother remained unmarried and Charles Gonthier childless, the Schwarzburg-Sondershausen branch of the House of Schwarzburg was on the verge of extinction, with no other princes remaining. The princely house of Schwarzburg consisted of two branches, Sondershausen being the senior line and Schwarzburg-Rudolstadt the junior. According to a family pact from 7 September 1713, upon the extinction of one of the branches, the principality would pass to the surviving one. However, as the Rudolstadt branch was also threatened with extinction on 21 April 1896, Prince Charles Gonthier agreed with the remaining dynasts, his brother Prince Leopold and cousin Prince Günther Victor of Schwarzburg-Rudolstadt, that their morganatic relative Prince Sizzo of Leutenberg was to become a member of the princely house with full succession rights. Their decision became law on 1 June 1896.[6]

In 1906 Prince Charles Gonthier suffered a serious injury in a hunting accident. He spent the remaining years of his life confined to a hospital bed and died in a sanatorium in Dresden. As his brother and heir Prince Leopold had died in 1906, Prince Charles Gonthier was succeeded by his cousin, Prince Günther Victor, in whom both Schwarzburg principalities became vested in a personal union.