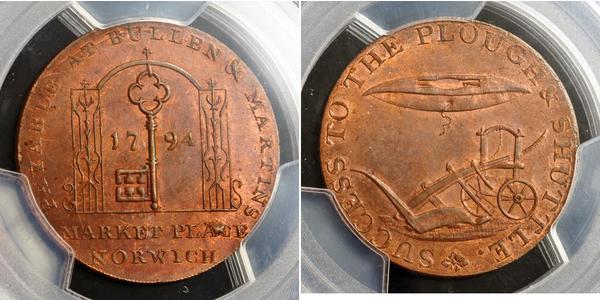 Reverse: Plough and shuttle. Legend: * SUCCESS TO THE PLOUGH AND SHUTTLE

Norwich  is a cathedral city in Norfolk, England. Situated on the River Wensum in East Anglia, it lies approximately 100 miles (161 km) north-east of London. It is the county town of Norfolkand is considered the capital of East Anglia, with a population of 141,300. From the Middle Ages until the Industrial Revolution, Norwich was the largest city in England after London, and one of the most important.

The city is the most complete medieval city in the UK, including cobbled streets such as Elm Hill, Timber Hill and Tombland, ancient buildings such as St Andrew's Hall, half-timbered houses such as Dragon Hall, The Guildhall and Strangers' Hall, the Art Nouveau of the 1899 Royal Arcade, many medieval lanes and the winding River Wensum that flows through the city centre towards Norwich Castle. The city has two universities, the University of East Anglia and the Norwich University of the Arts, and two cathedrals, Norwich Cathedral and St John the Baptist Cathedral.

Norwich is the only city within a National Park, the Norfolk Broads, and it also holds the largest permanent undercover market in Europe. The urban area of Norwich had a population of 213,166 according to the 2011 Census. The parliamentary seats cross over into adjacent local-government districts. A total of 132,512 (2011 census) people live in the City of Norwich and the population of the Norwich Travel to Work Area (i.e., the self-contained labour market area in and around Norwich in which most people live and commute to work) is 282,000 (mid-2009 estimate). Norwich is the fourth most densely populated local-government district in the East of England, with 3,480 people per square kilometre (8,993 per square mile).