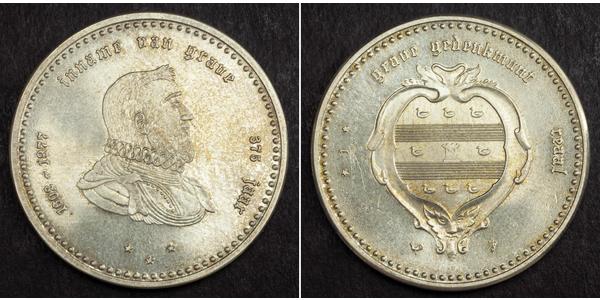 The Siege of Grave was a siege that took place between 18 July to 20 September 1602 as part of the Eighty Years' War and the Anglo–Spanish War. The Spanish held city of Grave was besieged by a Dutch and English army led by Maurice of Orange and Francis Vere respectively. After a siege of nearly two months the city surrendered when a Spanish relief army under Francisco de Mendoza was defeated just outside the city by the besiegers.  The defeat was severe enough to cause a major mutiny in the Spanish army.

Maurice of Orange (Dutch: Maurits van Oranje; German: Moritz von Oranien; 14 November 1567 – 23 April 1625) was stadtholder of all the provinces of the Dutch Republic except for Friesland from 1585 at the earliest until his death in 1625. Before he became Prince of Orange upon the death of his eldest half-brother Philip William in 1618, he was known as Maurice of Nassau.

Maurice spent his youth in Dillenburg in Nassau, and studied in Heidelberg and Leiden. He succeeded his father William the Silent as stadtholder of Holland and Zeeland in 1585, and became stadtholder of Utrecht, Guelders and Overijssel in 1590, and of Groningen in 1620. As Captain-General and Admiral of the Union, Maurice organized the Dutch rebellion against Spain into a coherent, successful revolt and won fame as a military strategist. Under his leadership and in cooperation with the Land's Advocate of Holland Johan van Oldenbarnevelt, the Dutch States Army achieved many victories and drove the Spaniards out of the north and east of the Republic. Maurice set out to revive and revise the classical doctrines of Vegetius and pioneered the new European forms of armament and drill. During the Twelve Years' Truce, a religious dispute broke out in the Republic, and a conflict erupted between Maurice and Van Oldenbarnevelt, which ended with the latter's decapitation. After the Truce, Maurice failed to achieve more military victories. He died without legitimate children in The Hague in 1625 and was succeeded by his younger half-brother Frederick Henry.