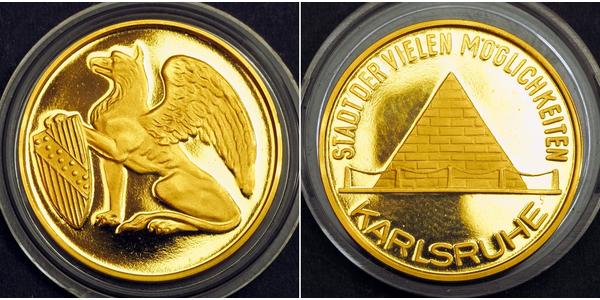 Karlsruhe (formerly spelled Carlsruhe)  is the second-largest city of the German federal state of Baden-Württemberg after its capital of Stuttgart, and its 309,999 (2016) inhabitants make it the 21st largest city of Germany. On the right bank of the Rhine, the city lies near the French-German border, between the Mannheim/Ludwigshafen conurbation to the north, and the Strasbourg/Kehl conurbation to the south. It is the largest city of Baden, a region named after Hohenbaden Castle in the city of Baden-Baden. Karlsruhe is also the largest city in the South Franconian dialect area (transitional dialects between Central and Upper German), the only other larger city in that area being Heilbronn. The city is the seat of the Federal Constitutional Court(Bundesverfassungsgericht), as well as of the Federal Court of Justice(Bundesgerichtshof) and the Public Prosecutor General of the Federal Court of Justice (Generalbundesanwalt beim Bundesgerichtshof).

Karlsruhe was the capital of the Margraviate of Baden-Durlach (Durlach: 1565-1718; Karlsruhe: 1718-1771), the Margraviate of Baden (1771-1803), the Electorate of Baden (1803-1806), the Grand Duchy of Baden (1806-1918), and the Republic of Baden (1918-1945). Its most remarkable building is Karlsruhe Palace, which was built in 1715. There are nine institutions of higher education in the city, most notably the Karlsruhe Institute of Technology (Karlsruher Institut für Technologie). Karlsruhe/Baden-Baden Airport (Flughafen Karlsruhe/Baden-Baden) is the second-busiest airport of Baden-Württemberg after Stuttgart Airport, and the 17th-busiest airport of Germany.