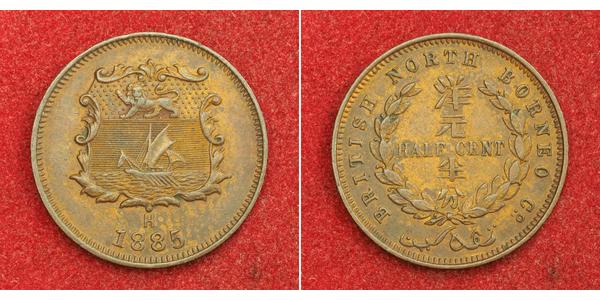 Obverse: Arms of the British North Borneo Company within foliage. Mint initial (H) and date (1885) below.

In 1882, the North Borneo Chartered Company   established a settlement on Pulau Gaya, one year after the Chartered   Company was given the mandate to rule Sabah. However, in 1897, this   settlement was burnt to the ground during the raid led by Mat Salleh, a   Sabah tribal Chief and it was never re-established. This company is also   known as 'Syarikat Borneo Utara British' and was criticised by the   locals for the taxes it collected.

Establishing law and order as well as recruiting   Sikh policeman from North India was one of the early roles the NBCC   initiated, as well as expanding trade, a system of government, courts to   enforce laws and punishment and building both a railway line from   Jesselton to Tenom and encouraging the harvesting and barter trade of   both local agriculture produce and crops, as well as establishment of   plantations.

North Borneo was a British protectorate under the sovereign North Borneo Chartered   Company from 1882 to 1946. After the war it became a crown colony of   Great Britain from 1946 to 1963, known in this time as British North Borneo.   It is located on the northeastern end of the island of Borneo. It is   now the state of Sabah, East Malaysia. The last Governor of North Borneo   was William Allmond Codrington Goode who held office from 1959 to 1963.