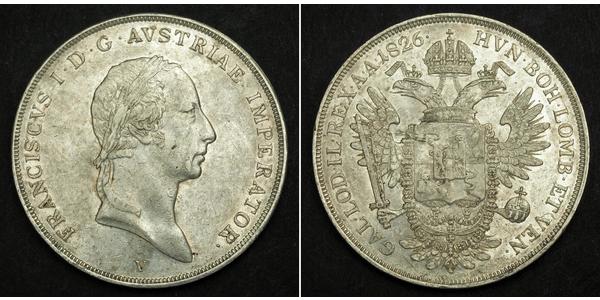 Obverse: Wreathed bust of Francis I as Emperor of Austria right. Mintmark (V, for Venice) below. Legend: FRANCISCVS I. D.G. AVSTRIAE IMPERATOR. / V Reverse: Crown of the Austrian empire and of Italy above shield of Lombardy-Venetia. Comment: The crown above the eagle is the crown of the Austrian Empire, which is placed here above the crown of Italy (known as the iron crown). Legend: GAL . LOD . IL . REX . A . A . 1826 . HVN . BOH . LOMB . ET VEN .

The Kingdom of Lombardy–Venetia (Italian: Regno Lombardo–Veneto; German: Königreich Lombardo–Venetien) was a kingdom in northern Italy, and part of the Austrian Empire. It was established after the defeat of Napoleon, according to the decisions of the Congress of Vienna, on 9 June 1815. The Kingdom ceased to exist when the remaining portion of it was annexed to the Kingdom of Italy in 1866.

The Congress of Vienna combined the territories of Lombardy (which had been ruled by the Habsburgs since the 16th century, and by the Austrian branch of the family from 1713 to 1796) and Venetia (which had been under Austrian rule intermittently since 1797) into a single unit under the Austrian Habsburgs.

After a popular revolution on 22 March 1848 (The Five Days of Milan), the Austrians fled from Milan, which become the capital city of the Governo Provvisorio della Lombardia (Lombardy Provisional Government). The next day, Venice also arose against the Austrians, forming the Governo Provvisorio di Venezia (Venice Provisional Government). The Austrians, after defeating the Sardinian troops at the Custoza (24 July-25 July 1848), entered in Milan (6 August) and Venice (24 August 1849), restoring Austrian rule.

Francis Joseph ruled over the Kingdom for the rest of its existence. His younger brother Maximilian, who later became Emperor of Mexico, served as his viceroy in Milan between 1857 and 1859.

Lombardy was annexed to the embryonic Italian state in 1859, by the Treaty of Zurich after the Second Italian War of Independence; Venetia was ceded to the Kingdom of Italy in 1866 in the aftermath of the Seven Weeks War, by the Treaty of Prague.