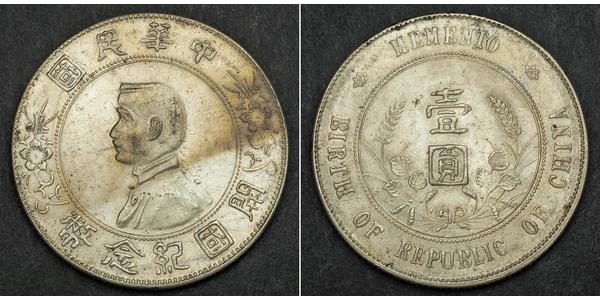 Obverse: Bust of Sun Yat-sen left, flanked by flowers in outer fields. Chinese characters above and below.

Sun Yat-sen (pinyin Sun Yì Xian) (12 November 1866 – 12 March 1925) was a Chinese revolutionary and political leader. As the foremost pioneer of Republican China, Sun is frequently referred to as the Father of the Nation. Sun played an instrumental role in overthrowing the Qing Dynasty in October 1911, the last imperial dynasty of China. He was the first provisional president when the Republic of China (ROC) was founded in 1912 and later co-founded the Kuomintang (KMT) where he served as its first leader. Sun was a uniting figure in post-Imperial China, and remains unique among 20th-century Chinese politicians for being widely revered in both mainland China and Taiwan.

Although Sun is considered one of the greatest leaders of modern China, his political life was one of constant struggle and frequent exile. After the success of the revolution, he quickly fell out of power in the newly founded Republic of China, and led successive revolutionary governments as a challenge to the warlords who controlled much of the nation. Sun did not live to see his party consolidate its power over the country. His party, which formed a fragile alliance with the Communists, split into two factions after his death. Sun's chief legacy resides in his developing a political philosophy known as the Three Principles of the People (The People's Relation/Connection, The People's Power, and the People's Livelihood/Welfare, or sometimes known as nationalism/sovereignty, democracy, and socialism/populism/livelihood depending on the translation).