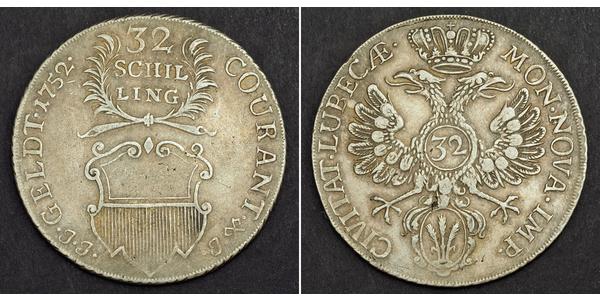 The typical rim marking of this period, was a new introduced measure to keep silver coins from being clipped and therefore a trustable currency.

Lübeck is the second largest city in Schleswig-Holstein, in northern Germany, and one of the major ports of Germany. It was for several centuries the "capital" of the Hanseatic League ("Queen of the Hanse") and because of its Brick Gothic architectural heritage is on UNESCO's list of World Heritage Sites

In 1226 Emperor Frederick II declared the city of Lübeck to be an Imperial Free City. In the 14th century Lübeck became the "Queen of the Hanseatic League", being by far the largest and most powerful member of this medieval trade organization.

Lübeck remained a Free Imperial City even after the German Mediatisation in 1803 and became a sovereign state after the end of the Holy Roman Empire in 1806. In course of the war of the Fourth Coalition against Napoleon, troops under Bernadotte occupied the neutral Lübeck after a battle against Blücher on November 6th, 1806. Under the Continental System, trade suffered and from 1811 to 1813 Lübeck was formally annexed as part of the First French Empire.