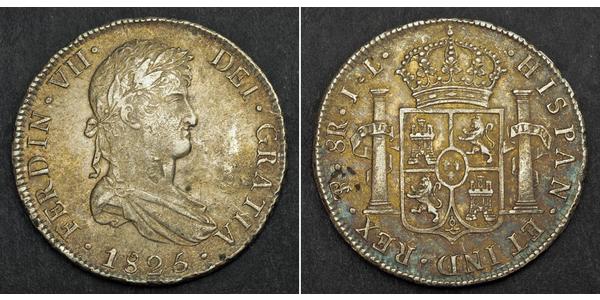 The Spanish dollar (also known as the piece of eight, the real de a ocho, or the eight   real coin) is a silver coin, worth eight reales, that was minted in the   Spanish Empire after a Spanish currency reform of 1497. It was legal tender in the United States until an Act of the United States Congress discontinued the practice in 1857.   Through widespread use in Europe, the Americas and the Far East, it   became the first world currency by the late 18th century. Many existing   currencies, such as the Canadian dollar, United States dollar and the   Chinese yuan, as well as currencies in Latin America and the Philippines   peso were initially based on the Spanish dollar and other 8 reales   coins.

The eldest son of Charles IV, king of Spain, and of     his wife Maria Louisa of Parma, he was born in the vast palace of El     Escorial near Madrid.

When his father's abdication was extorted by a     popular riot at Aranjuez in March 1808, he ascended the throne but     turned again to Napoleon, in the hope that the emperor would support     him. He was in his turn forced to make an abdication and imprisoned in     France for almost seven years at the Chateau of Valencia in the town of     Valencia.

In March 1814 the Allies returned him to Madrid. The     Spanish people, blaming the liberal, enlightened policies of the     Francophiles (afrancesados) for incurring the Napoleonic occupation and the Peninsular War, at first welcomed Fernando.     Ferdinand soon found that while Spain was fighting for independence   in   his name and while in his name juntas had governed in Spanish   America, a   new world had been born of foreign invasion and domestic   revolution.   Spain was no longer an absolute monarchy under the liberal   Constitution   of 1812. Ferdinand, in being restored to the throne,   guaranteed the   liberals that he would govern on the basis of the   existing constitution,   but, encouraged by conservatives backed by the   Church hierarchy, he   rejected the constitution within weeks (May 4)   and arrested the liberal   leaders (May 10), justifying his actions as   rejecting a constitution   made by the Cortes in his absence and without   his consent. Thus he had   come back to assert the Bourbon doctrine   that the sovereign authority   resided in his person only.

After he succeeded to the throne in 1788 his one     serious occupation was hunting. Affairs were left to be directed by his     wife and her lover Manuel de Godoy. Although Godoy essentially took   over   his wife and his office, the king was favourable towards him for   all   his life. When terrified by the French Revolution he turned to the     Inquisition to help him against the party which would have carried   the   reforming policy of Charles III much further. But he never took   more   than a passive part in the direction of his own government. He   simply   obeyed the impulse given him by the queen and Godoy. In 1803,   after   smallpox had affected his daughter Maria Luisa, the king   commissioned   his doctor Francisco Javier de Balmis to bring the   vaccine to the   Spanish colonies on state expenses.

He had a profound belief in his divine right and the     sanctity of his person. He thought it very important to seem a very     powerful monarch, although his kingdom was treated as a mere dependency     by France and his throne was dominated by the queen and her lover.   Spain   allied with France and supported the Continental Blockade, but   withdrew   after the Battle of Trafalgar. When Napoleon won from Prussia   in 1807,   Godoy returned to the French side, but France no longer   considered Spain   a worthy ally. But even the alliance with France, as   it was, made   Godoy's rule unpopular and fueled the partido   fernandista, the   supporters of Ferdinand, who favored a close   relationship with Great   Britain.