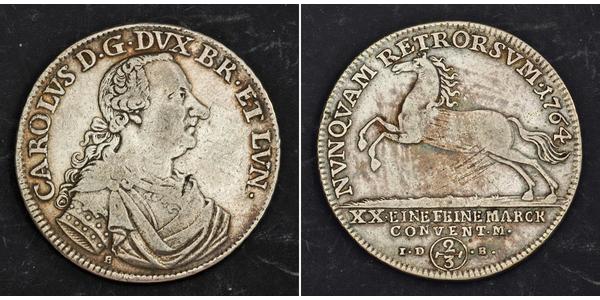 Charles William Ferdinand, Duke of Brunswick-Lüneburg, Prince of Brunswick-Wolfenbuttel-Bevern (Karl Wilhelm Ferdinand, Herzog zu Braunschweig-Lüneburg, Fürst von Braunschweig-Wolfenbüttel-Bevern) (October 9, 1735 - October 16, 1806) was a sovereign prince of the Holy Roman Empire, and a professional soldier who served as a Generalfeldmarschall of the Kingdom of Prussia. Born in Wolfenbüttel, Germany, he was duke of Brunswick-Lüneburg from 1780 until his death and ruled over the Wolfenbüttel subdivision of the duchy. He is a recognized master of the modern warfare of the mid-18th century, a cultured and benevolent despot in the model of Frederick the Great, and was married to Augusta, a sister of George III of Great Britain.

Charles William Ferdinand (German: Karl Wilhelm Ferdinand) was the son of Charles I, Duke of Brunswick-Lüneburg and Philippine Charlotte, daughter of King Frederick William I of Prussia. Karl received an unusually wide and thorough education, and travelled in his youth in the Netherlands, France and various parts of Germany. His first military experience was in the North German campaign of 1757, under Prince William Augustus, Duke of Cumberland. At the Battle of Hastenbeck he won great renown by a gallant charge at the head of an infantry brigade; and upon the capitulation of Kloster Zeven he was easily persuaded by his uncle Ferdinand of Brunswick, who succeeded Cumberland, to continue in the war as a general officer. The exploits of the hereditary prince, as he was called, soon gained him further reputation, and he became an acknowledged master of irregular warfare. In pitched battles, and in particular at Minden and Warburg, he proved himself an excellent subordinate.

After the close of the Seven Years' War, the prince visited England with his bride, the daughter of Frederick, Prince of Wales, and in 1766 he went to France, being received both by his allies and his late enemies with every token of respect. In Paris he made the acquaintance of Marmontel; in Switzerland, whither he continued his tour, that of Voltaire; and in Rome, where he remained for a long time, he explored the antiquities of the city under the guidance of Winckelmann. After a visit to Naples he returned to Paris, and thence, with his wife, to Brunswick. His services to the dukedom during the next few years were of the greatest value; with the assistance of the minister Feonçe von Rotenkreuz he rescued the state from the bankruptcy into which the war had brought it. His popularity was unbounded, and when he succeeded his father, Duke Karl I, in 1780, he soon became known as a model to sovereigns.