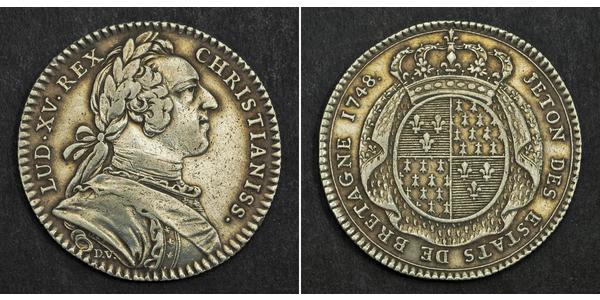 The Estates of Brittany was the States Provincial for the province of Brittany. It gathered members of the high clergy, a large number of nobles and delegates from the 42 towns and cities of Brittany. In 1788 it included nearly 1,000 nobles as opposed to fewer than 100 representatives of the other two orders.

The Estates were founded in the Middle Ages by Arthur II, Duke of Brittany. It continued as the States Provincial of France during the time of the Ancien Régime.

In addition to founding the Estates, Duke Arthur II introduced the innovation of permitting the third estate to be represented.

The marquise de Sévigné participated in its meetings at Rennes and Vitré between 1670 and 1690, writing:

I did not want to see the opening, it was too early. The Estates do not have to be long. It only needed to ask what the King wanted. He need not say a word; and, voilà, it is done. For the Governor, he found there, I don't know how, over 40,000 écus which returned to him. An infinity of other presents, pensions, road and town repairs, 15 or 20 grandes tables, continual gaming, eternal balls, comedies three times a week, a grand 'braverie' : that's the Estates. I forget 400 pipes of wine that were drunk, but if I forget that little thing, the others did not forget it, and this was the first.

Meetings were the opportunity for an intense nightlife, with banquets (paid for on the provincial budget) offering the chance to continue disputes begun at the daily sittings by competition in consumption, drinking and card games.

In more serious matters the Estates' interests were essentially the same as the parliament of Brittany. They sometimes met concurrently and addressed similar issues. The two bodies naturally cooperated in restricting royal power in the province and limiting the action of royal representatives there, mainly the intendant and commander in chief. The Estates particularly came into conflict with the royal state over taxes, since Brittany had been exempted from the national salt tax and also enjoyed other privileges. Conflicts arose in the late 17th century, leading to the uprising known as the Revolt of the papier timbré and later in the early 18th century when the Estates resisted the centralising measures of the king, leading to the Pontcallec Conspiracy, which was severely repressed by the monarchy.

Louis XV (Versailles, 15 February 1710 – Versailles, 10 May 1774) ruled as King   of France and of Navarre from 1 September 1715 until his death on 10 May   1774. Coming to the throne at the age of five, Louis reigned until 15   February 1723, the date of his thirteenth birthday, with the aid of the   Régent, Philippe, duc d'Orléans, his great-uncle, thereafter taking   formal personal control of government.

Unexpectedly surviving the death of most of the royal   family, he enjoyed a favourable reputation at the beginning of his   reign and earned the epithet "le Bien-Aimé" ("the Beloved").   However, in time, his lack of morals, general inability to effectively   reform France and the Monarchy, and the perceived failings of his   foreign policy lost him the affection of his people, and he ended his   life amongst the most unpopular kings of France.

While historians have traditionally treated Louis XV   harshly, more recent research has suggested that he was in fact very   intelligent and dedicated to the task of ruling the largest state in   Europe, bar Russia. His nagging indecision, fueled by his awareness of   the complexity of problems ahead, as well as his profound timidity,   hidden behind the mask of an imperious king, may account for the poor   results achieved during his reign. In many ways, Louis XV prefigures the   "bourgeois rulers" of the romantic 19th century. While dutifully   playing the role of the mighty king carved out by his predecessor and   great-grandfather, Louis XIV, Louis XV in fact cherished nothing more   than his private life far away from the pomp and ceremony of Court.   Having lost his mother while still little more than an infant, he longed   for a reassuring and motherly presence, which he tried to find in the   intimate company of women, something for which he was much criticized   both during and after his life.