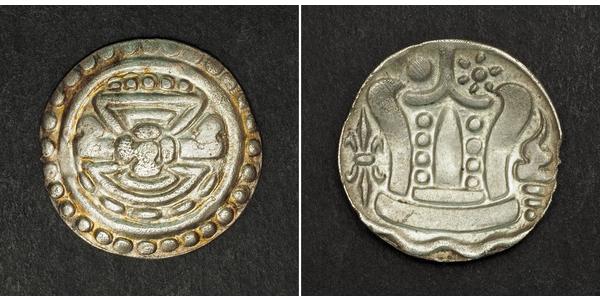 Reverse: Temple containing lingam with four rows of pellets on either side. Sun and moon above, thunderbolt and sankh shell at sides.

Sri Ksetra or Thaye Khittaya (သရေခေတ္တရာ [θəjè kʰɪʔtəjà]; lit., "Field of Fortune" or "Field of Glory"), located 8 km southeast of Prome (Pyay) at present-day Hmawza village, was the last and southernmost Pyu capital. The city was founded between the 5th and 7th centuries, :62–63,77   and likely overtook Halin as the premier Pyu city by the 7th or 8th   century, and retained that status until the Mranma arrived in the 9th   century. The city was home to at least two dynasties, and maybe three.   The first dynasty, called the Vikrama Dynasty, is believed to have   launched the Pyu calendar, which later became the Burmese calendar, on   22 March 638. The second dynasty was founded by King Duttabaung on 25 March 739 (11th waxing of Tagu 101 ME).

Sri Ksetra is the largest Pyu site discovered thus far. (Only   Beikthano and Sri Ksetra have been extensively excavated. Other   important Pyu cities as Maingmaw and Binnaka could yield more artefacts   with more extensive excavations.) It occupied a larger area than that of   the 11th century Pagan or 19th century Mandalay. Circular in design,   Sri Ksetra was more than 13 km in circumference and three to four km   across, or about 1400 hectares of occupied area. The city's brick walls   were 4.5 meters high, and had 12 gates with huge devas (deities) guarding the entrances and a pagoda at each of the four corners.

It also has curving gateways, such as those found at Halin and   Beikthano. In the centre of the city was what most scholars think   represented the rectangular palace site, 518 meters by 343 meters,   symbolising both a mandala and a zata (horoscope), like in Maingmaw. Only the southern half of the city was taken up by the palace,   monasteries and houses; the entire northern half consisted of rice   fields. Together with the moats and walls, this arrangement ensured that   the city could withstand a long siege by enemies.

Sri Ksetra was an important entrepôt between China and India. It was located on the Irrawaddy, not far from   the sea as the Irrawaddy delta had not yet been formed. Ships from the   Indian Ocean could come up to Prome to trade with the Pyu realm and   China. Trade with India brought deep cultural contacts. Sri Ksetra has yielded the most extensive remains of Theravada Buddhism.   Religious art suggests several distinct occupations with earlier   influences stemming from Southeast India and later influences from   Southwest India while 9th century influences include those from the   Nanzhao Kingdom. Much of the Chinese account of the Pyu states was through Sri Ksetra. Chinese pilgrims Xuanzang in 648 and Yijing in 675 mentioned Sri Ksetra in their accounts of Buddhist kingdoms of   Southeast Asia. The Tang histories mention the arrival at the court of   an embassy from the Pyu capital in 801.

The Dvaravati (Thai: ทวารวดี, rtgs: Thawarawadi)   period lasted from the 6th to the 13th centuries. Dvaravati refers to   both a culture and a disparate conglomerate of principalities.

The Mon Kingdom of Dvaravati, which may have existed as early as the fifth   century, was controlling the Buddhist sites of Phra Pathom and Phong Tuk   by at least the seventh century; legends engraved on royal urns report the following kings: Suryavikrama   (673-688), Harivikrama (688-695), Sihavikrama (695-718).[2] A Khmer inscription dated 937 documents a line of princes of Chanasapura started by a Bhagadatta and ended by a Sundaravarman and his sons Narapatisimhavarman and Mangalavarman. But at that time, the 10th century, Dvaravati began to come under the influence of the Khmer Empire and central Thailand was ultimately invaded by King Suryavarman II in the first half of the 12th century. Hariphunchai survived its southern progenitors until the late 13th century AD when it was incorporated in the Lanna Kingdom. The people of the region used the Mon language, but whether they were Mon people is unknown. There is evidence that these principalities may comprise many cultural groups of people, including Malays and Khmer people. The theory of Thai migration into Dvaravati has been refuted and is now known to have happened much later.

The term Dvaravati derives from coins which were inscribed in Sanskrit śrī dvāravatī. The Sanskrit word dvāravatī means "that which has gates" :301 (from dvar "door gate"). Its name may derive from the city of Dvārakā in ancient India.

Little is known about the administration of Dvaravati. It might simply have been a loose gathering of chiefdoms rather than a centralised state, expanding from the coastal area of the upper peninsula to the riverine region of Chao Phraya River. Hinduism and Buddhism were significant. The three largest settlements appear to have been at Nakhon Pathom, Suphanburi, Praak Srigacha, with additional centers at U Thong, Chansen, Khu Bua, Pong Tuk, Muang Phra Rot, Lopburi, Si Mahasod, Kamphaeng Saen, Dong Lakhorn, U-Taphao, Ban Khu Muang, and Sri Thep.

Dvaravati itself was heavily influenced by Indian culture, and played an important role in introducing Buddhism and particularly Buddhist art to the region. Stucco motifs on the religious monuments include garudas, makaras, and Nāgas.   Additionally, groups of musicians have been portrayed with their   instruments, prisoners, females with their attendants, soldiers   indicative of social life. Votive tablets have also been found, also moulds for tin amulets, pottery, terracotta trays, and a bronze chandelier, earring, bells and cymbals.