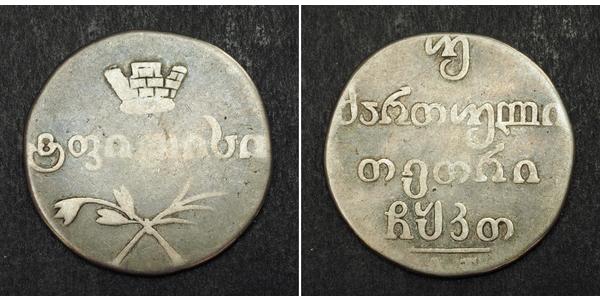 Obverse: Crown above inscription (in Georgian) and branches in saltire.   Reverse: Denomination and date (all in Georgian script and numerals) in four lines; mintmaster's initials (A.T.) in exergue.

The country of Georgia became part of the Russian Empire in the 19th century. Throughout the early modern period, the Muslim Ottoman and Persian empires had fought over various fragmented Georgian kingdoms and principalities; by the 18th century, Russia emerged as the new imperial power in the region. Since Russia was an Orthodox Christianstate like Georgia, the Georgians increasingly sought Russian help. In 1783, Heraclius II of the eastern Georgian kingdom of Kartli-Kakheti forged an alliance with the Russian Empire, whereby the kingdom became a Russian protectorate and abjured any dependence on its suzerain Persia. The Russo-Georgian alliance, however, backfired as Russia was unwilling to fulfill the terms of the treaty, proceeding to annex the troubled kingdom in 1801, and reducing it to the status of a Russian region (Georgia Governorate). In 1810, the western Georgian kingdom of Imereti was annexed as well. Russian rule over Georgia was eventually acknowledged in various peace treaties with Persia and the Ottomans, and the remaining Georgian territories were absorbed by the Russian Empire in a piecemeal fashion in the course of the 19th century.

Until 1918, Georgia would be part of the Russian Empire. Russian rule offered the Georgians security from external threats, but it was also often heavy-handed and insensitive to locals. By the late 19th century, discontent with the Russian authorities led to a growing national movement. The Russian Imperial period, however, brought unprecedented social and economic change to Georgia, with new social classes emerging: the emancipation of the serfs freed many peasants but did little to alleviate their poverty; the growth of capitalism created an urban working class in Georgia. Both peasants and workers found expression for their discontent through revolts and strikes, culminating in the Revolution of 1905. Their cause was championed by the socialist Mensheviks, who became the dominant political force in Georgia in the final years of Russian rule. Georgia finally won its independence in 1918, less as a result of the nationalists' and socialists' efforts, than from the collapse of the Russian Empire in World War I.

Fearing the results of an Ottoman defeat by Russia, in 1854 Britain, France, the Kingdom of Sardinia and also then Duchy of Savoy , (which would be absorbed into Italy in 1861), and the Ottoman Empire on the other joined forces in the conflict known what became known as the Crimean War on the Ottoman side and in Western Europe, but known in Russia as the Eastern War, (Russian: ????????? ?????, Vostochnaya Vojna) (March 1854–February 1856).