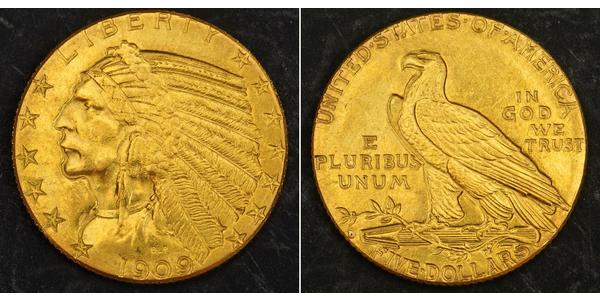 The Indian Head eagle was a ten-dollar gold piece, or eagle struck by the United States Mint continuously from 1907 until 1916, and then irregularly until 1933. The obverse and the reverse, designed by the sculptor Augustus Saint-Gaudens,   were originally commissioned for use on other denominations.   Saint-Gaudens was suffering from cancer, and did not survive to see the   coins released.

Beginning in 1904, President Theodore Roosevelt proposed the introduction of new, more artistic designs on US coins,   prompting the Mint to hire Saint-Gaudens to create them. Roosevelt and   Saint-Gaudens at first considered a uniform design for the four   denominations of US coin which were struck in gold, but in 1907   Roosevelt decided to use a model for the obverse of the eagle that the   sculptor had meant to use for the cent. For the reverse of the   ten-dollar coin the President decided on a design featuring a standing bald eagle, which had been developed for the twenty-dollar piece designed by Saint-Gaudens.

The coin, as sculpted by Saint-Gaudens, was in too high relief for the Mint to strike readily; completion of the design modifications   necessary to make the coin sufficiently flat to be struck by one blow of   the Mint's presses took months. Following the sculptor's death on   August 3, 1907, Roosevelt insisted that the new eagle be finished and   struck that month. New pieces were given to the President on August 31,   which differ from the coins struck later for circulation.

The omission of the motto "In God We Trust" on the new coins caused public outrage, and prompted Congress to pass a bill mandating its inclusion. Mint Chief Engraver Charles E. Barber added the words and made minor modifications to the design. The Indian   Head eagle was struck regularly until 1916, and then intermittently   until President Franklin Roosevelt directed the Mint to stop producing gold coins in 1933. Its termination   ended the series of eagles struck for circulation begun in 1795. Many   Indian Head eagles were melted by the government in the late 1930s; the   1933 issue is a particular rarity, as few were distributed.