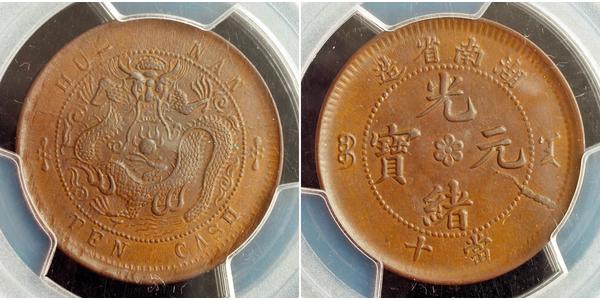 Reverse: Four chinese characters around manchu words flanking a dot. All within circle of pellets.

Hunan is a province of the People's Republic of China, located in the middle reaches of the Yangtze watershed in South Central China; it borders the province-level divisions of Hubei to the north, Jiangxi to the east, Guangdong and Guangxi to the south, Guizhou to the west, and Chongqing to the northwest. With a population of just over 67 million as of 2014 residing in an area of approximately 210,000 km2 (81,000 sq mi), it is China's 7th most populous and the 10th most extensive province-level by area. The name Hunan means "south of Lake Dongting," a lake in the northeast of the province; Hu means "lake" while nan means "south." Vehicle license plates from Hunan are marked Xiāng (Chinese: 湘), after the Xiang River, which runs from south to north through Hunan and forms part of the largest drainage system for the province.  Its capital and largest city is Changsha, which also abuts the Xiang River.

The Guangxu Emperor (14 August 1871-November 1908), born Zaitian , was the tenth emperor of the Manchu-led Qing Dynasty, and the ninth Qing emperor to rule over China proper. His reign lasted from 1875 to 1908, but in practice he ruled, under Empress Dowager Cixi's influence, only from 1889 to 1898. He initiated the Hundred Days' Reform, but was abruptly stopped when Cixi launched a coup in 1898, after which he was put under house arrest until his death. His reign name means "The Glorious Succession".