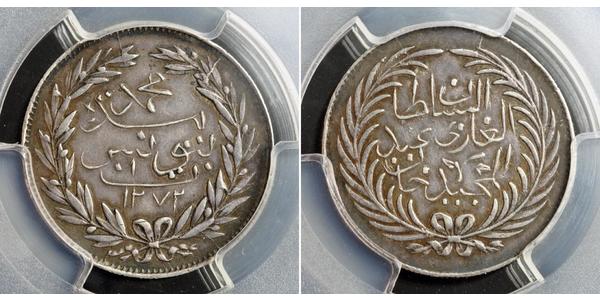 Reverse: Titles of the Sultan and blessing formula within wreath.

Abdülmecid I, Abdul Mejid I, Abd-ul-Mejid I or Abd Al-Majid I Ghazi (23/25 April 1823 – 25 June 1861) was the 31st Sultan of the Ottoman   Empire and succeeded his father Mahmud II on July 2, 1839. His reign was   notable for the rise of nationalist movements within the empire's   territories. Abdülmecid wanted to encourage Ottomanism among the   secessionist subject nations and stop the rise of nationalist movements   within the empire, but failed to succeed despite trying to integrate   non-Muslims and non-Turks more thoroughly into the Ottoman society with   new laws and reforms. He tried to forge alliances with the major powers   of Western Europe, namely the United Kingdom and France, who fought   alongside the Ottoman Empire at the Crimean War against Russia. In the   following Congress of Paris on 30 March 1856, the Ottoman Empire was   officially included among the European family of nations. Abdülmecid's   biggest achievement was the announcement and application of the Tanzimat   (Reorganization) reforms which were prepared by his father Mahmud II   and effectively started the modernization of Turkey in 1839.