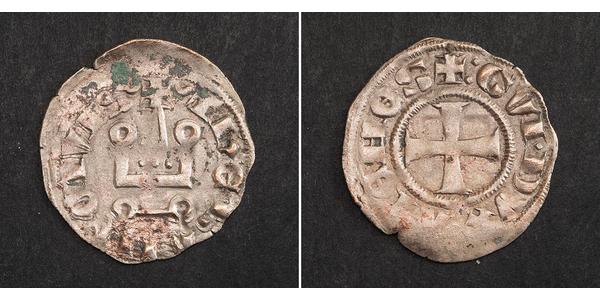 The Duchy of Athens (Greek: Δουκᾶτον Ἀθηνῶν, Catalan: Ducat d'Atenes) was one of the Crusader states set up in Greece after the conquest of the Byzantine Empire during the Fourth Crusade, encompassing the regions of Attica and Boeotia, and surviving until its conquest by the Ottoman Empire in the 15th century.

The first duke of Athens (as well as of Thebes, at first) was Otto de la Roche, a minor Burgundian knight of the Fourth Crusade. Although he was known as the "Duke of Athens" from the foundation of the duchy in 1205, the title did not become official until 1260. Instead, Otto proclaimed himself "Lord of Athens" (in Latin Dominus Athenarum, in French Sire d'Athenes). The local Greeks called the dukes "Megas Kyris" (Greek: Μέγας Κύρης, "Great Lord"), from which the shortened form "Megaskyr", often used even by the Franks to refer to the Duke of Athens, is derived.

Athens was originally a vassal state of the Kingdom of Thessalonica, but after Thessalonica was captured in 1224 by Theodore, the Despot of Epirus, the Principality of Achaea claimed suzerainty over Athens, a claim disputed by the de la Roche in the War of the Euboeote Succession. Like the rest of Latin Greece, however, the Duchy recognized the suzerainty of Charles I of Sicily after the Treaties of Viterbo in 1267.

The Duchy occupied the Attic peninsula as well as Boeotia and extended partially into Thessaly, sharing an undefined border with Thessalonica and then Epirus. It did not hold the islands of the Aegean Sea, which were Venetian territories, but exercised influence over the Latin Triarchy of Negroponte. The buildings of the Acropolis in Athens served as the palace for the dukes.

The Duchy was held by the family of la Roche until 1308, when it passed to Walter V of Brienne. Walter hired the Catalan Company, a group of mercenaries founded by Roger de Flor, to fight against the Byzantine successor state of Epirus, but when he tried to dismiss and cheat them of their pay in 1311, they slew him and the bulk of the Frankish nobility at the Battle of Halmyros and took over the Duchy. Walter's son Walter VI of Brienne retained only the lordship of Argos and Nauplia, where his claims to the Duchy were still recognized.

In 1312, the Catalans recognized the suzerainty of King Frederick III of Sicily, who appointed his son Manfred as Duke. The ducal title remained in the hands of the Crown of Aragon until 1388, but actual authority was exercised by a series of vicars-general. In 1318/19 the Catalans conquered Siderokastron and the south of Thessaly as well, and created the Duchy of Neopatras, united to Athens. Part of Thessaly was conquered from the Catalans by the Serbs in the 1340s.

Under Aragonese rule, the feudal system continued to exist, not anymore under the Assizes of Romania, but under the Customs of Barcelona, and the official common language was now Catalan instead of French. Each city and district—on the example of Sicily—had its own local governor (veguer, castlà, capità), whose term of office was fixed at three years and who was nominated by the Duke, the vicar-general or the local representatives. The principal towns and villages were represented by the síndic, which had their own councils and officers. Judges and notaries were elected for life or even as inherited offices.

In 1379 the Navarrese Company, in the service of the Latin emperor James of Baux, conquered Thebes and part of Neopatria. Meanwhile, the Aragonese kept another part of Neopatras and Attica.

After 1381 the Duchy was ruled by the Kings of Sicily until 1388 when the Acciaioli family of Florence captured Athens. Neopatras was occupied in 1390.

From 1395 to 1402 the Venetians briefly controlled the Duchy. In 1444 Athens became a tributary of Constantine Palaeologus, the despot of Morea and heir to the Byzantine throne. In 1456, after the Fall of Constantinople (1453) to the Ottoman Empire, Turahanoğlu Ömer Bey conquered the remnants of the Duchy. Despite the Ottoman conquest, the title of "Duke of Athens and Neopatras" continued in use by the kings of Aragon, and through them by the Kings of Spain, up to the present day.

Athens was the seat of a metropolitan archdiocese within the Patriarchate of Constantinople when it was conquered by the Franks. The see, however, was not of importance, being the twenty-eighth in precedence in the Byzantine Empire. Nonetheless, it had produced the prominent clergyman Michael Choniates. It was a metropolitan see (province or eparchy) with eleven suffragans at the time of conquest: Euripus, Daulia, Coronea, Andros, Oreos, Scyrus, Karystos, Porthmus, Aulon, Syra and Seriphus, and Ceos and Thermiae (or Cythnus). The structure of the Greek church was not significantly changed by the Latins, and Pope Innocent III confirmed the first Latin Archbishop of Athens, Berard, in all his Greek predecessors' rights and jurisdictions. The customs of the church of Paris were imported to Athens, but few western European clergymen wished to be removed to such a distant see as Athens. Antonio Ballester, however, an educated Catalan, had a successful career in Greece as archbishop.

The Parthenon, which had been the Orthodox church of the Theotokos Atheniotissa, became the Catholic Church of Saint Mary of Athens. The Greek Orthodox church survived as an underground institution without official sanction by the governing Latin authorities. The Greek clergy had not typically been literate in the twelfth century and their education certainly worsened under Latin domination, when their church was illegal.

The archdiocese of Thebes also lay within the Athenian duchy. Unlike Athens, it had no suffragans. However, the Latin archbishopric produced several significant figures as archbishops, such as Simon Atumano. It had a greater political role than Athens because it was situated in the later capital of the duchy at Thebes. Under the Catalans, the Athenian diocese had expanded its jurisdiction to thirteen suffragans, but only the diocese of Megara, Daulia, Salona, and Boudonitza lay with the duchy itself. The archiepiscopal offices of Athens and Thebes were held by Frenchmen and Italians until the late fourteenth century, when Catalan or Aragonese people began to fill them.

Nerio I Acciaioli or Acciajuoli (full name Rainerio; died 25 September 1394) was the actual ruler of the Duchy of Athens from 1385. Born to a family of Florentine bankers, he became the principal agent of his influential kinsman, Niccolò Acciaioli, in Frankish Greece in 1360. He purchased large domains in the Principality of Achaea and administered them independently of the absent princes. He hired mercenaries and conquered Megara, a strategically important fortress in the Duchy of Athens, in 1374 or 1375. His troops again invaded the duchy in 1385. The Catalans who remained loyal to King Peter IV of Aragon could only keep the Acropolis of Athens, but they were also forced into surrender in 1388.

Nerio and his son-in-law, Theodore I Palaiologos, Despot of the Morea, occupied the Lordship of Argos and Nauplia. Nerio received Nauplia, but the Venetians expelled his troops from the town. Nerio was captured by a mercenary commander, Pedro de San Superano, in 1389. He was released after he promised to support the Venetians to seize Argos from Theodore I. He had to cede parts of his domains to Venice as a guarantee to keep his promise, but he could not convince his son-in-law to surrender Argos. Nerio's troops captured the Duchy of Neopatras from the Catalans in 1390, but the Ottoman sultan Bayezid I conquered the territory in 1393. Thereafter Nerio paid a yearly tribute to the sultan. King Ladislaus of Naples, who claimed suzerainty over Frankish Greece, invested Nerio with the Duchy of Athens on 11 January 1394. In his last will, Nerio distributed his domains between his younger daughter, Francesca, his illegitimate son, Antonio, and the church of Saint Mary (the Parthenon) of Athens.